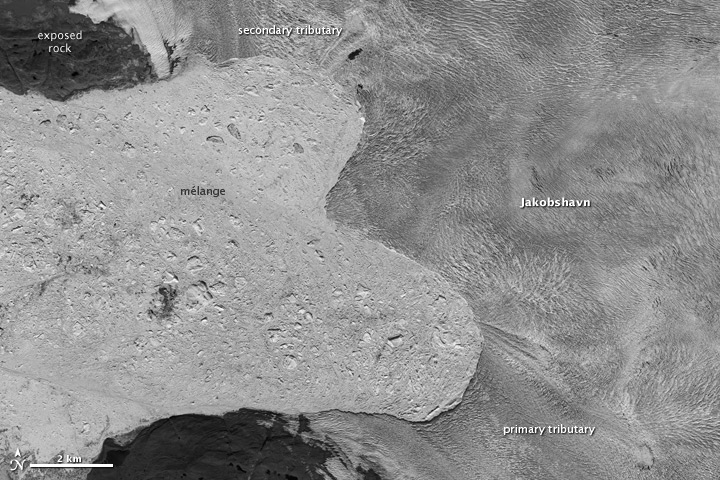 Under the lens of a microscope or a telescope, familiar objects can appear alien because the lines of the familiar resolve into otherwise unseen detail. Such is the case in this extremely high-resolution view of Greenland’s Jakobshavn Glacier. Glaciers are rivers of ice, with have long sweeping lines that define the direction of flow. In this detailed view, however, the glacier surface is far more complex, with wave-like patterns laid over the long flow lines. Dark melt water ponds and water-carved crevasses dot the surface.

WorldView-2, a commercial satellite run by DigitalGlobe, acquired this image on July 16, 2011. Shown in black and white, the Jakobshavn Glacier is the darker gray surface on the right side of the image. The glacier has two tributaries, the primary southern branch and a secondary northern branch. As early as a decade ago, the two branches joined into a single stream, but the glacier has retreated beyond their point of intersection.

That intersection is now a jumble of icebergs and bits of ice broken from the glacier. This flowing mélange is brighter than the glacier, and its uneven surface resembles a sponge. Flanking the mélange is exposed rock dotted with black pools of water—the last remnant of glacial ice that once blanketed the area.

Jakobshavn is the fastest-flowing glacier in the world. In 2010, the glacier moved at 15 kilometers per year, shedding ice into the Arctic Ocean as it surged from land to sea. It drains more than six percent of the Greenland ice cap and contributes more to global sea level rise than any other feature in the Northern Hemisphere. The glacier has both retreated and thinned in recent years. In 2010, Jakobshavn retreated 1.5 kilometers.

While evidence of retreat is apparent in this image, thinning is not. To understand how much ice Jakobshavn is losing in three dimensions, scientists measure the thickness of the ice using radar and lidar instruments. The IceBridge campaign, a NASA mission airplane flights over the Arctic and Antarctica, carries instruments that measure both the ice thickness and the shape of the ground beneath the ice. The 2009 and 2010 flights over Greenland revealed that Jakobshavn is thinning.

Read more at IceBridge: Building a record of Earth’s changing ice, one flight at a time.

Where once two streams of ice merged in Greenland’s Jakobshavn Glacier, today there is division and a complex surface riddled with crevasses and melt ponds.

Acquired July 22, 2010, this high-resolution image shows cracks on the surface of the Petermann Glacier in northwestern Greenland.