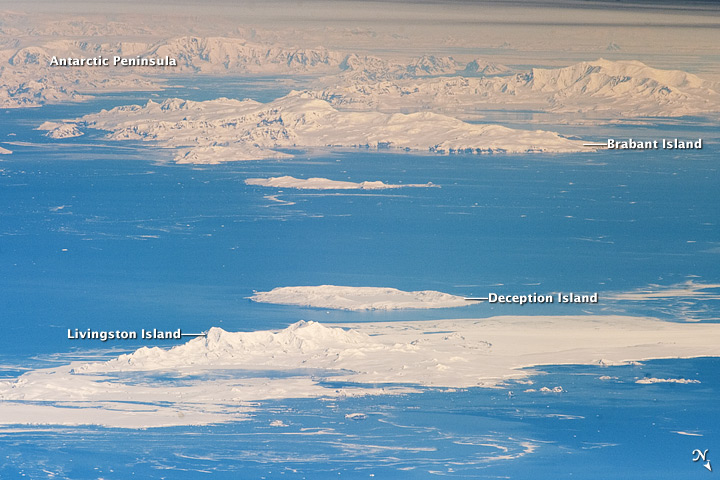 The inclined equatorial orbit of the International Space Station (ISS) limits astronauts to nadir views of Earth—looking straight down from the spacecraft—between approximately 52 degrees North latitude and 52 degrees South. However, when viewing conditions are ideal, the crew can obtain detailed oblique images—looking outwards at an angle—of features at higher latitudes, such as Greenland or, in this image, Antarctica.

While the bulk of the continent of Antarctica sits over the South Pole, the narrow Antarctic Peninsula extends like a finger towards the tip of South America. The northernmost part of the Peninsula is known as Graham Land, a small portion of which (located at approximately 64 degrees South latitude) is visible at the top left in this astronaut photograph.

Off the coast of Graham Land to the north-northwest, two of the South Shetland Islands—Livingston Island and Deception Island—are visible. Both have volcanic origins, and active volcanism at Deception Island has been recorded since 1800. (The last verified eruptive activity occurred in 1970.) Closer to the coastline of Graham Land, Brabant Island (not part of the South Shetlands) also includes numerous outcrops of volcanic rock, attesting to the complex tectonic history of the region.

The ISS was located over the South Atlantic Ocean, approximately 1,800 kilometers (1,100 miles) to the northeast when this image was taken. This long viewing distance, combined with the highly oblique angle, accentuates the shadowing of the ground and provides a sense of the topography similar to the view you get from an airplane. It also causes foreshortening of features in the image, making them appear closer to each other than they actually are. For example, the distance between Livingston and Deception Islands is approximately 20 kilometers (12 miles).

Astronaut photograph ISS029-E-41836 was acquired on October 4, 2011, with a Nikon D3 digital camera using a 1200 mm lens, and is provided by the ISS Crew Earth Observations experiment and Image Science & Analysis Laboratory, Johnson Space Center. The image was taken by the Expedition 29 crew. The image has been cropped and enhanced to improve contrast. Lens artifacts have been removed. The International Space Station Program supports the laboratory as part of the ISS National Lab to help astronauts take pictures of Earth that will be of the greatest value to scientists and the public, and to make those images freely available on the Internet. Additional images taken by astronauts and cosmonauts can be viewed at the NASA/JSC Gateway to Astronaut Photography of Earth. Caption by William L. Stefanov, Jacobs/ESCG at NASA-JSC.

Astronauts on the ISS captured an unusual, airplane-like view of the Antarctic Peninsula and nearby islands.

An Iceberg Without a Name

An unnamed berg of unknown origin drifted in the South Atlantic Ocean.

The remote island may be inhospitable to humans, but it provides a home to major populations of wildlife.

A Thousand Miles from Nowhere

Bouvet Island, a territory of Norway, is one of the most remote islands in the world.

Astronauts capture a view of the South Atlantic Island that looks like it has been taken from an airplane. Mountains and glaciers stand in stark relief against the sea.