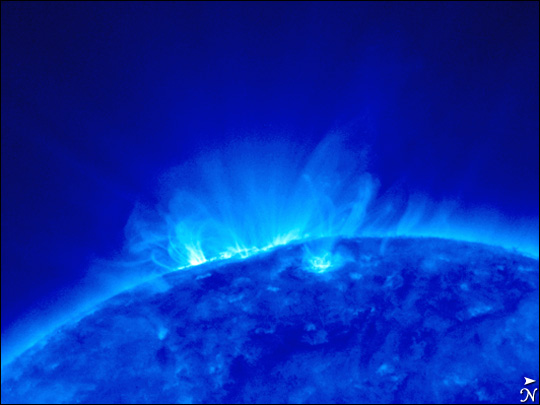 Loops of highly charged particles burst from an active region on the Sun’s surface in this image, taken on December 4, 2006. Among the first images taken by STEREO’s SECCHI/Extreme Ultraviolet Imaging Telescope, the image shows the Sun’s roiling surface and atmosphere at temperatures around one million Kelvin (1.8 million degrees Fahrenheit). The ultraviolet light in this range is not typically visible to the human eye, so it is represented here in blue.

The charged particles, mostly extremely hot protons and electrons, rising from the active region create a strong magnetic field that pulls the particles into the loops seen here. Over time, magnetic stress builds in the Sun’s atmosphere until the energy is released in a massive explosion. The explosion sends a giant cloud of charged particles (a coronal mass ejection) and X-ray solar flares hurtling into space with a force comparable to a billion megaton nuclear bombs. When the charged particles and X-rays bombard the Earth, they can disrupt communications and power systems and are a threat to satellites and astronauts in space. The active regions that produce flares are visible from Earth as Sun spots, but the streaming particles emitting ultraviolet light in this image are only visible from space. Just one week after this image was taken, the Sun spot shown here produced a strong solar flare.

Some coronal mass ejections produce powerful storms that threaten the Earth, while others do not. Understanding the difference between harmful and harmless coronal mass ejections is one of the biggest questions that scientists studying the Sun face. Currently, scientists only see ejections in one dimension from a single instrument, which means that they can’t determine where the charged particles are going or how they travel.

Far Side of the Sun

For the first time in history, the world has a full view of the far side of the Sun and of the entire 360-degree sphere at once.

Far Side of the Sun

For the first time in history, the world has a full view of the far side of the Sun and of the entire 360-degree sphere at once.