Fall Colors in the Mid-Atlantic 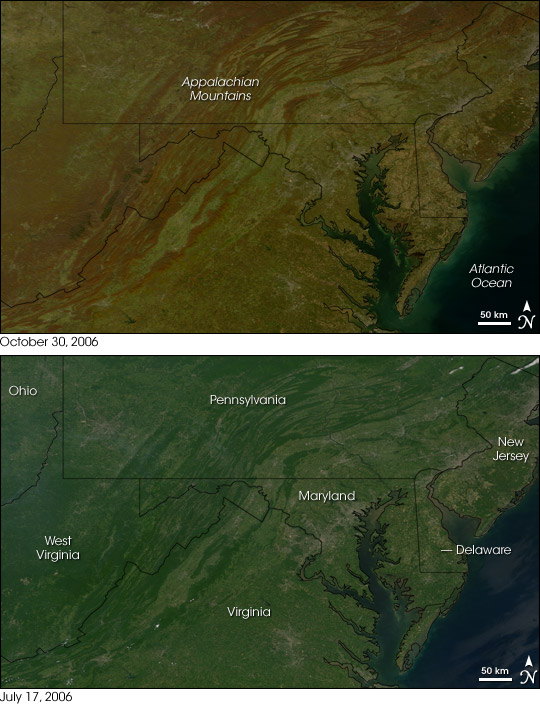 The colors may not look as brilliant as the reds and golds you would see on the ground, but even from space, the difference between the summer and fall attire of the U.S. Mid-Atlantic is dramatic. The reflection of green wavelengths of sunlight from chlorophyll in plant and trees leaves dominates the color-scape on July 17, 2006. Forested slopes of the Appalachian Mountains are deeper green than interwoven valleys, which are often occupied by farms and pastures, especially in western Virginia and Pennsylvania. By October 30, 2006, fall’s cooler temperatures and diminishing daylight have burnished the higher elevations, including almost all of West Virginia, the Blue Ridge Mountains in Virginia, and the Allegheny Range in south-central Pennsylvania. Agriculture-dominated lands, such as western Virginia’s Shenandoah Valley, are still green.

In West Virginia, the changing of the season reveals another difference in vegetation type in the region. In summer, the state’s eastern mountains appear almost uniformly green. By October, however, a difference has emerged: several of the ridgelines that span the neck of the eastern panhandle have remained deep green while the surrounding forest turned brown. These two- to four-thousand-foot-high ridgelines—the state’s highest mountains—are home to a greater number of evergreen trees, such hemlock and red spruce, than are found at lower elevations.

One feature common to both seasons’s images is the appearance of cities and roads. The route of Interstate 95 is easy to follow as a cement-colored line through eastern Pennsylvania, Maryland, and Virginia. Several large eastern cities dot the corridor like knots in a rope: Philadelphia, along the border of Pennsylvania and New Jersey; Baltimore, in central Maryland; Washington, D.C., sandwiched between Maryland and Virginia; and Richmond, in central Virginia.

The colors may not look as brilliant as the reds and golds you would see on the ground, but even from space, the difference between the summer and fall attire of the U.S. Mid-Atlantic is dramatic.

Before the Leaves Fall

Beneath a collection of contrails, colorful foliage spreads across a mountain landscape in the eastern U.S.

As temperatures cool, deciduous trees in Siberia are making their annual transformation.

Washington on the Potomac River

Wedged between Maryland and Virginia, the District of Columbia was established in 1790 to serve as the permanent seat of the U.S. federal government.