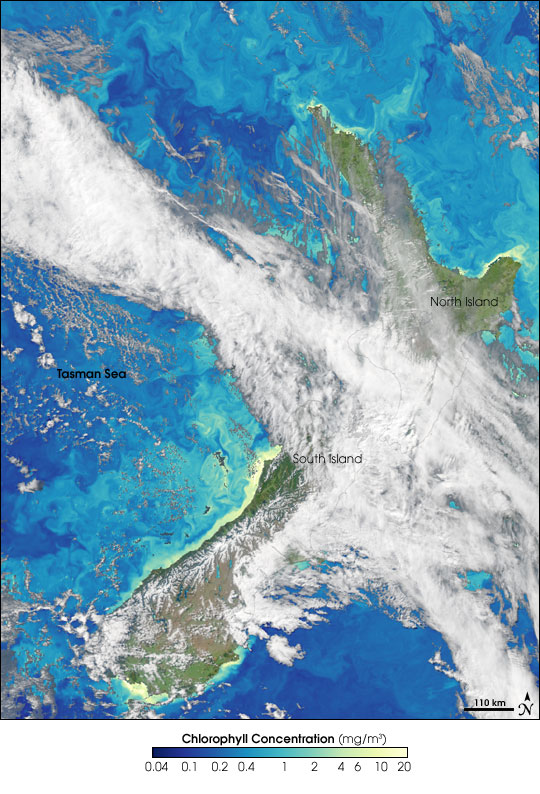 Swirls of chlorophyll trace out the turbulent water patterns off the coasts of New Zealand in this image captured by the Moderate Resolution Imaging Spectroradiometer (MODIS) on NASA’s Aqua satellite on September 26, 2006. Just like land plants, the single-celled ocean plants known as phytoplankton contain chlorophyll to harness the Sun’s energy for photosynthesis. In large amounts, chlorophyll and other plant pigments create colorful patterns on the water’s surface. In this image, the amount of chlorophyll in the water is color-coded in shades of dark blue (little to no chlorophyll) to yellow (up to 20 milligrams of chlorophyll per cubic meter of water).

The most obvious pattern in the image is that chlorophyll concentrations are very high around coastal areas. These areas often have high phytoplankton productivity because nutrient concentrations are also high. Winds and water currents in coastal areas often enhance upwelling of deeper ocean water, which is high in nutrients accumulated over time. Run-off from rivers also elevates nutrient levels. Very high chlorophyll levels ringing the shoreline may be partly due to sediment and organic matter mixing in with the chlorophyll.

The ribbons of high-chlorophyll water that stretch out into the Tasman Sea around the islands may be tracing areas of upwelling water. Eddies—pools of re-circulating water that spin off currents and become isolated—sometimes have low chlorophyll concentrations. The low levels may be because currents are forcing the water and any phytoplankton it contains downward, or it may be that plants have used up the available nutrients in the eddy.

Part of the reason the waters around New Zealand are so turbulent is that they are near the Southern Hemisphere Subtropical Front, where the Southern Ocean meets the Pacific and Indian Oceans. The turbulence and mixing that result from the interaction of oceans with different temperatures and salinities enhance phytoplankton growth, which is the foundation of productive fisheries. Among the important commercial fisheries in New Zealand are hoki and orange roughy.

Beginning with the Sea-viewing Wide Field-of-view Sensor (SeaWiFS) instrument in the late 1990s, NASA has been making global maps of ocean chlorophyll to help scientists understand the timing and location of phytoplankton blooms and how ocean plants both influence and react to climate and other environmental changes. Among the new approaches NASA is using to study ocean chlorophyll is merging data from SeaWiFS and Aqua MODIS to increase the number of cloud-free observations available to scientists each day.

Cold-water Upwelling in the Gulf of Tehuantepec

In the winter, strong winds drive surface waters away from the shore, and cold water from the deep ocean wells up to replace it.