Fires in the Western U.S. 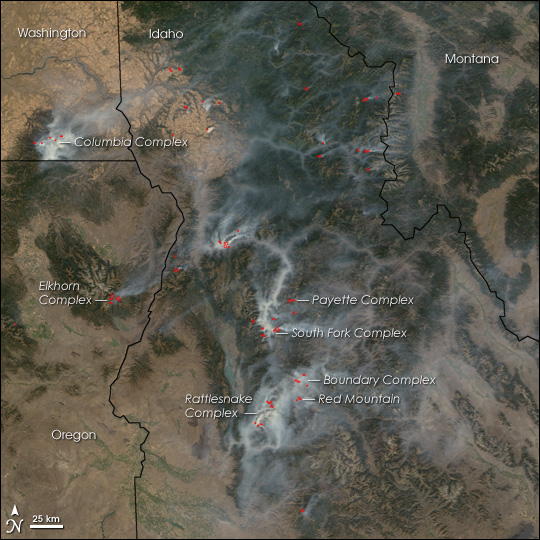 Thick, white smoke seeps through the valleys of the Rocky Mountains ranges that run through Idaho, Washington, and Oregon in this photo-like image taken on September 12, 2006. At the time, firefighters were monitoring 29 wild fires in the three states, said the National Interagency Fire Center. Many of the fires were started by lightning, as suggested by the clusters of fires (red dots) seen in this image. The image was taken in the early afternoon by the Moderate Resolution Imaging Spectroradiometer (MODIS) on NASA’s Terra satellite. Most of the fires are burning in the deep-green, pine-covered mountains. Sage, scrub, and grass-covered desert is tan, while agricultural land creates a pattern of tiny, bright green and gold dots.

Several other large fires burned in the western United States on September 12. The Derby Fire in western Montana (just beyond the right edge of the image) had threatened homes and forced hundred of evacuations in early September. By September 12, it had burned 207,644 acres and was 70 percent contained, said the National Interagency Fire Center. The Day Fire was burning in Los Padres National Forest about 40 miles north of Los Angeles, California. Its thick smoke temporarily closed Interstate 5 on September 12.

Since late July 2006, firefighters have been working to contain numerous wildfires in several Western states. This image from September 12, 2006, shows multiple large fires in Washington, Oregon, and Idaho. 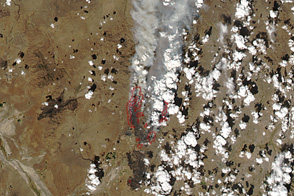 Dense smoke pours from a fast-growing wildfire in northern Nevada in this image from October 3, 2011.

Dense smoke pours from a fast-growing wildfire in northern Nevada in this image from October 3, 2011.

These images show the extent of wildfires burning in the Cascade Mountains southeast of Portland, Oregon.

These images show the extent of wildfires burning in the Cascade Mountains southeast of Portland, Oregon.