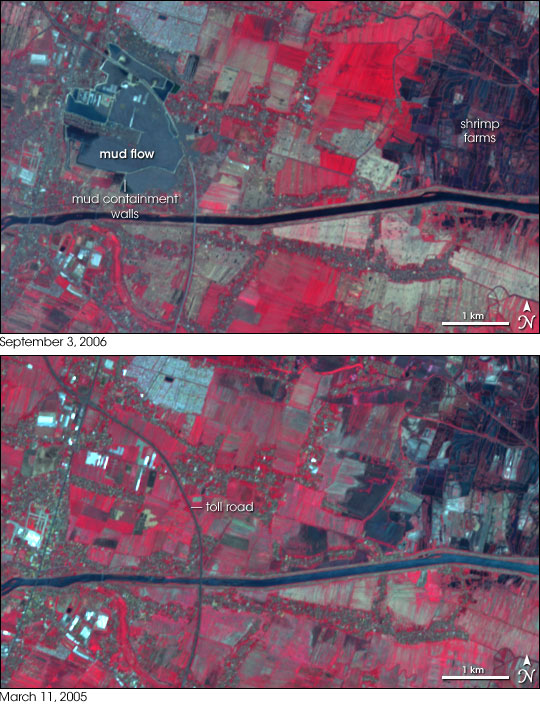 In eastern Java, Indonesia, a giant lake of mud was bubbling up from deep in the Earth and spreading out over villages south of the city of Sidoarjo in early September 2006. Damage to an oil and gas exploration well resulted in an outpouring of mud and gas that have forced at least 9,000 people to evacuate the devastated area.

This pair of images from the Advanced Spaceborne Thermal Emission and Reflection Radiometer (ASTER) on NASA’s Terra satellite shows the region before the accident (bottom; March 11, 2005) and after the lake had begun to cover farmland and villages (top; September 3, 2006). The satellite images have been enhanced with ASTER’s observations of infrared light to make bare ground (shades of gray) and water (dark blue) stand out better from vegetation (bright red). The mud lake appears grey-blue, covering the irregular rectangles of fields that previously occupied the landscape southwest of a curving section of toll road. The oil company responsible for the wells has been working to build containment walls and diversion channels to control the expansion of the lake, but it may be months before engineers are able to devise a way to stop the flow. According to news reports, residents in the region are becoming increasingly concerned about whether the control measures in place will adequately contain the growing lake when the rainy season begins in coming months.

To the east of the new and still-growing mud lake, the dark blue grids near the coast are likely aquaculture pens, probably for shrimp farming. The threat of contamination of waters and shrimp farms from the overflow of the mud lake is a concern for people downstream of site.