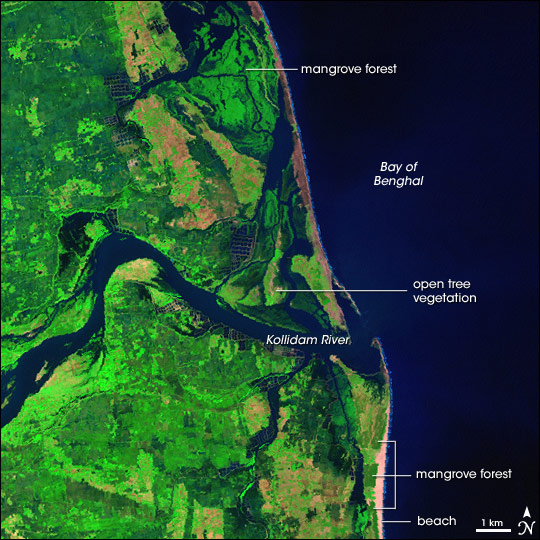 The Indian Ocean tsunami of December 26, 2004, served as a reminder that nature can be profoundly destructive. Researchers who looked more closely at the tsunami’s aftermath, however, learned something else: While destructive, nature is not uniformly so. In the areas that saw the most intense tsunami activity, devastation was unavoidable, but in areas farther away, environmental factors other than proximity affected the damage done by the tsunami.

Cuddalore District near the southern tip of India gave researchers an excellent opportunity to examine tsunami damage under different circumstances. The area has a fairly straight shoreline, relatively uniform beaches, and a consistent continental slope. What varied along the shoreline was coastal tree vegetation; some areas had trees, others did not. By examining cloud-free satellite images before and after the tsunami, researchers could discern what a difference the coastal trees made. The Landsat 7 satellite acquired this image on October 20, 2000, capturing the vegetation cover and land surface features before the tsunami struck. In this image, blue indicates water and green indicates vegetation. Other types of land cover range in color from brown to pink. Two dense mangrove forests appear near the coast.

Mangrove tress, well adapted to tidal environments along shorelines, lined part—but not all—of the coast of the Cuddalore District, both in 2000 when this image was acquired, and in 2004 when the tsunami struck. After the natural disaster devastated the region, an international team of scientists surveyed the damage. In the fall of 2005, the researchers published their findings in the journal Science. They found significantly less damage from the tsunami in areas shielded by mangrove forests. Coastal villages with no protection, the team concluded, were destroyed, while villages protected by mangrove trees survived the tsunami with little or no damage.

A tsunami washed over the low-lying coastal resort region near Camaná,southern Peru, following a strong earthquake on June 23, 2001. The earthquake was one of the most powerful of the last 35 years and had a magnitude of 8.4. After the initial quake, coastal residents witnessed a sudden draw-down of the ocean and knew a tsunami was imminent. They had less than 20 minutes to reach higher ground before the tsunami hit. Waves as high as 8 meters came in four destructive surges reaching as far as 1.2 kilometers inland. Thousands of buildings were destroyed, and the combined earthquake and tsunami killed as many as 139 people.

Wreckage and Recovery in Ishinomaki, Japan

Acquired in March 2011 and February 2012, these images document the recession of flood waters after the Tohoku tsunami.