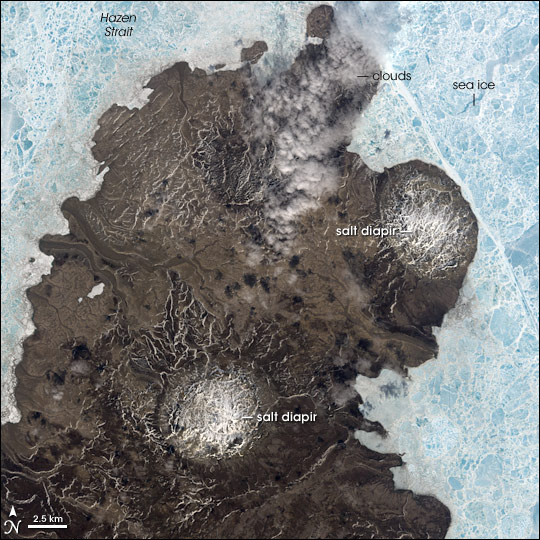 They may look like meteor craters, but the circular features in the surface of northern Canada’s Melville Island actually formed from geologic processes deep underground. These features on the island’s Sabine Peninsula are salt domes, or diapirs. When ancient seas evaporate, they leave behind salt deposits. The salt layers are buried by sediment, which eventually turns into rock. Because the salt deposit is less dense than the overlying rock, it’s buoyant. The buoyant mass of salt balloons upward and intrudes into the overlying rocks through weak spots. The intruding “salt bubble” is called a salt diaper.

This image from the Landsat 7 satellite shows two salt diapirs on Melville Island. The island’s rocky surface appears to be dusted with snow in places, even though summer had officially begun. Pale blue and white, sea ice surrounds the island like a carefully crafted stained-glass window. A few puffy clouds stretch across the northern tip of the island where it juts into the Hazen Strait. Hazen Strait is one of the interconnected pathways that weave through the northern Canadian islands that stretch between Baffin Bay to the southeast and the Arctic Ocean to the northwest.

Melville Island lies in a geologic formation known as the Sverdrup Basin, a southwest-northeast-trending basin about 1,300 kilometers long and 400 kilometers wide. The salt deposits in the basin are linked to a period in Earth’s past known as the Carboniferous, which spanned the time between about 359 to 299 million years ago.

A mix of uplifting salt and other sedimentary and metamorphic rocks make for colorful landscapes in the Persian Gulf.