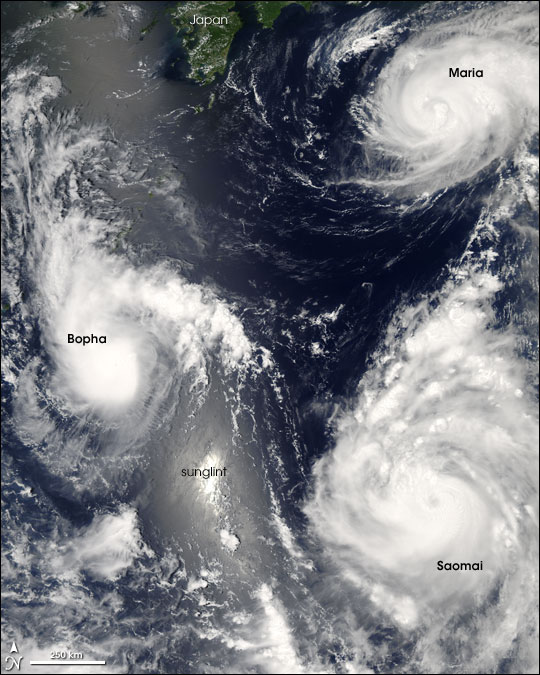 Three different typhoons were spinning over the western Pacific Ocean on August 7, 2006, when the Moderate Resolution Imaging Spectroradiometer (MODIS) on NASA’s Aqua satellite acquired this image. The strongest of the three, Typhoon Saomai, formed in the western Pacific on August 4, 2006, as a tropical depression. Within a day, it had become organized enough to be classified as a tropical storm. While Saomai was strengthening into a storm, another tropical depression formed a few hundred kilometers to the north, and by August 6, it became tropical storm Maria. Bopha formed just as Maria reached storm status and became a storm itself on August 7.

As of August 7, the University of Hawaii's Tropical Storm Information Center predicted that Bopha and Saomai would continue on tracks that would take each into China, while Maria would move northwest across the southern end of Japan. Saomai was predicted to gather strength, while Maria and Bopha were projected to remain near their current strengths.

This photo-like image was acquired at 12:35 p.m. local time (04:35 UTC) on August 7. It is unusual, but certainly not unprecedented, to have three storm systems all in the same general area at one time. The trio makes an interesting illustration of the evolution of tropical storm systems. Bopha, the youngest at just a few hours old, shows only the most basic round shape of a tropical storm. Maria, a day older, shows more distinct spiral structure with arms and an apparent central eye. Despite their differences in appearance, both storms were around the same size and strength, with peak sustained winds of around 90 and 100 kilometers per hour (58 and 63 miles per hour), respectively.

A day older than Maria is the much more powerful Typhoon Saomai. At the time of this image, the typhoon had sustained winds of around 140 km/hr (85 mph), and forecasters predicted that it would continue to gather strength before coming ashore in China, according to the University of Hawaii’s Tropical Storm Information Center. The typhoon’s well-developed structure (including a distinct, closed eye in the center) in comparison to Maria is clear in this image.

The slanting diagonal feature through the image is sunlight bouncing off the ocean into the MODIS instrument, a phenomenon called sunglint. The very bright patch is where the reflection is strongest.

Typhoon Saomai formed in the western Pacific on August 4, 2006, as a tropical depression. The storm gathered strength and struck southeast China as a typhoon on August 10.