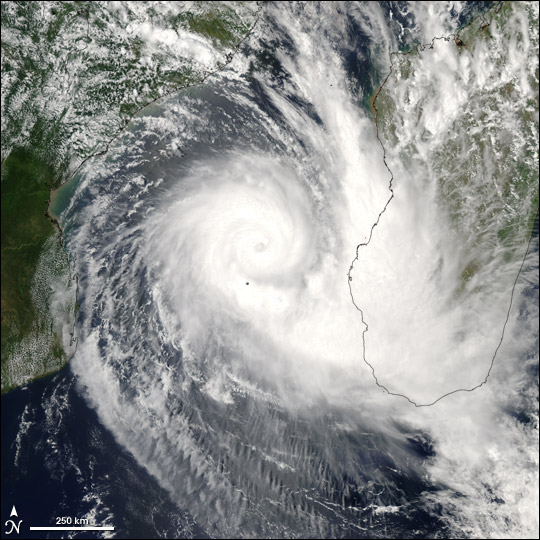 Tropical Cyclone Boloetse crossed the island of Madagascar as a tropical storm in late January 2006, with moderately strong rains. The storm intensity declined to tropical-depression strength as it crossed the mountainous ridgeline that runs along the eastern shore of Madagascar. However, once the storm system reached the warm waters of the Mozambique Channel, the tropical depression reorganized and built up enough strength to become a tropical cyclone.

The Moderate Resolution Imaging Spectroradiometer (MODIS) on the Aqua satellite observed Tropical Cyclone Boloetse in the Mozambique Channel on February 3, 2006, at 11:00 UTC (2:00 p.m. local time). At that time, the cyclone was beginning a south and eastward track, and it was predicted to strike a glancing blow along the southwestern corner of Madagascar as it moved back out into the Indian Ocean. The cyclone had sustained winds of around 165 kilometers per hour (105 miles per hour), classifying it as a Category 2 storm on the Saffir-Simpson scale. Storms of this strength typically cause moderate damage to coastal areas with storm surges around 1.5 to 2 meters (4 to 7 feet). Winds are sufficient to damage temporary structures such as trailers and sheds, and remove roofs from some permanent buildings.