Rare Snow in and around Tokyo 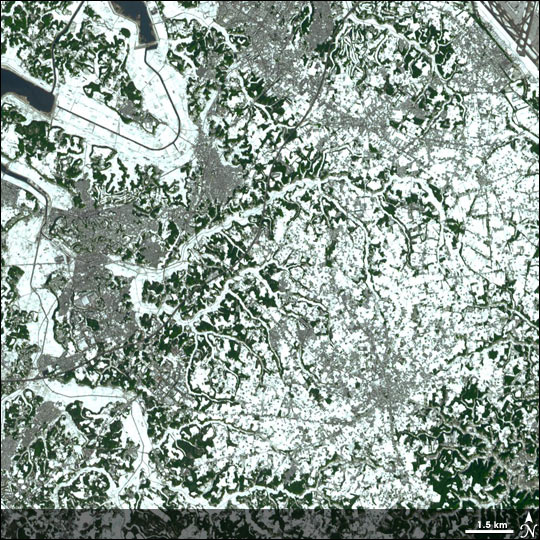 Snow is a rare sight in Japan’s capital city, Tokyo. But on January 25, 2006, snow is exactly what the Advanced Spaceborne Thermal Emission and Reflection Radiometer (ASTER) saw when it acquired this image. The city was hit with a rare snow storm on January 21. As much as 3.5 inches fell in the center of the city, reported the Agence France-Presse. To the east, nearer the Pacific, enough snow fell to close the Narita Airport, stranding thousands of passengers.

Bright white snow mixes with dark green vegetation, deep blue waters, and the flat gray of developed areas in this image, which shows suburban areas to the east of Tokyo. (The large version of the scene shows the far eastern edge of Tokyo.) A pair of reservoirs connected by canals is visible at upper left. In the large version of the image, boats are scattered across Tokyo Bay like specks of confetti. This simulated natural-color ASTER image covers an area of 50.6 by 55.8 kilometers, and is centered near 35.7 degrees North, 139.9 degrees East. An image from the Moderate Resolution Imaging Spectroradiometer (MODIS) on NASA's Terra satellite on the same day shows the entire extent of the snowfall across the region.

Acquired July 22, 2011, and July 8, 2011, these false-color images compare conditions around Lonquimay, Chile, which was buried in several feet heavy snow.

Image of the Day Severe Storms Snow and Ice