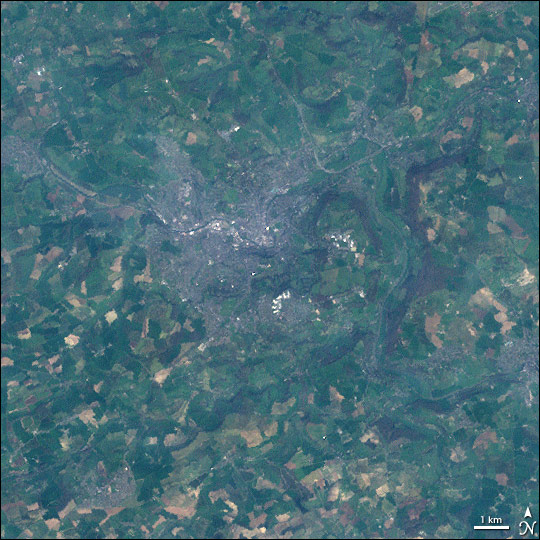 Approximately 160 kilometers (100 miles) southwest of London, the city of Bath in southwest England has made history in several ways. Underlain by Britain’s only hot mineral springs, the city was built as a spa at least as early as the Roman era, and perhaps earlier, drawing thousands of visitors over the centuries who hoped for cures the waters might provide. The city was the site of various battles from the Anglo-Saxon era, around the 7th century, to modern times. On a more genteel note, it was home to Jane Austen for several years. Yet Bath has made another important contribution to history, namely in the making of geologic maps. Arguably the world’s first published geologic map, released at the end of the 18th century, covered the area around Bath.

The Enhanced Thematic Mapper Plus (ETM+) instrument on NASA’s Landsat satellite captured this photo-like image of Bath on April 4, 2002. The city appears as a grayish splotch sprawling through the mostly green landscape. Surrounding the city are fields of variegated green dotted with occasional patches of tan. The River Avon meanders through the center of town. Until recently, this river—once a network of braided streams—periodically flooded parts of the city. The construction of flood-control structures made it more manageable. Over time, rivers can change course, leaving behind dried-up riverbeds. The wormlike, charcoal-colored features in the right half of the image could be old river channels. Lying at the bottom of the Avon Valley, the city of Bath is surrounded by limestone hills.

Bath had certainly seen its share of maps by 1799, but not the new kind of map published that year. As Simon Winchester recounted in The Map that Changed the World, the budding geologist William Smith mapped the area in a way it hadn’t been mapped before. In fact, no place had. Inspired by an agricultural map, and by his own experiences in mining and fossil collecting, Smith decided to draft a map of the area showing what was below the surface—the rock types underneath the buildings, farms, and trees. Titled A Map of Five Miles round the City of Bath, on a scale of one inch and a half to a mile, from an Actual Survey, including all the new roads, with Alternations and Improvements to the present time, 1799, it was arguably the first geologic map ever published. Smith developed a color code for the rock types that is still in use today. He went on to publish a geologic map of England, Wales, and part of Scotland in 1815. Today, NASA satellite data continue to extend the modern era of map making started by Smith.

This particular map might not have led to any outburst of activity at the time, but geologic maps quickly assumed an important role in science and commerce. Nineteenth-century England relied heavily on coal for power, and knowing where to find the remains of ancient swamps that would yield this fossil fuel saved miners precious time and money. Fossil fuels aside, geologic maps also play an important role in locating earthquake faults and landslides.

The year 1799 proved to be an important one for Earth science, besides the publication of the map of Bath. The same year, Smith and two friends, Joseph Townsend and Benjamin Richardson, recognized what is now known as the Carboniferous-Permian Boundary, a separation of major geologic time periods. The same year, famous fossil hunter Mary Anning was born.