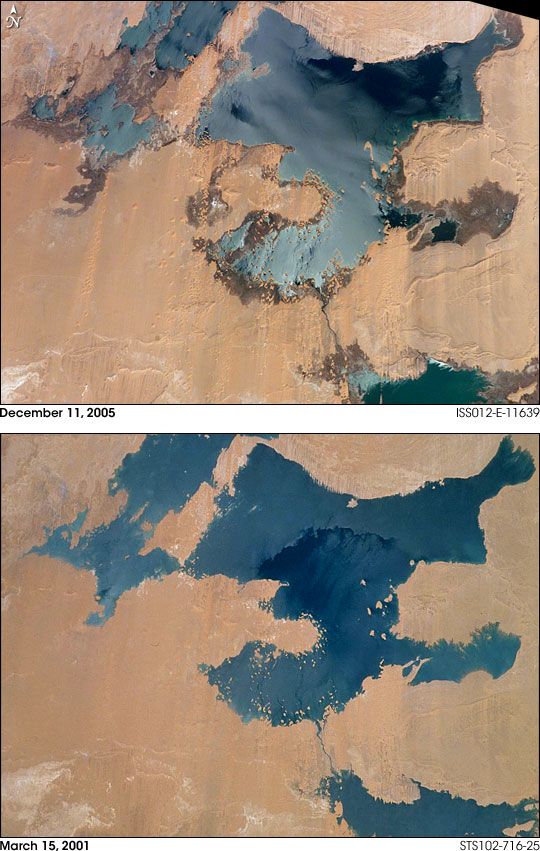 Nearly six years of regional drought and rapidly increasing demand for water have resulted in decreasing water levels in lakes throughout East Africa. Water levels in Africa’s largest lake, Lake Victoria, have dropped by about 1 meter (3 feet) over the past 10 years. The drought has similarly impacted the source regions of the Nile River, reducing water flows downstream into Egypt and Lake Nasser.

This pair of images documents recent drops in water levels in the Toshka Lakes region of Egypt. The Toshka Lakes and the New Valley surrounding the lakes constitute a major Egyptian project to claim a huge area of desert for agriculture and industry by diverting Nile River water from Lake Nasser. The initial flooding occurred in the late 1990s, when Lake Nasser water levels were at an all-time high. The flooded regions of the Toshka Lakes west of Lake Nasser have decreased greatly over the years, exposing the former dune fields (dunes appear as islands in the lake and along the shoreline of the top image), and leaving a “bath-tub ring” of wetlands (dark region) surrounding the lake shorelines. As both the drought and development continue, this region of Egypt is sure to change.

Astronaut photograph ISS012-E-11639 was acquired December 11, 2005, with a Kodak 760C digital camera using an 180 mm lens, and is provided by the ISS Crew Earth Observations experiment and the Image Science & Analysis Group, Johnson Space Center. The earlier image, STS102-716-25, was taken from the Space Shuttle on March 15, 2001 using a Hasselblad film camera equipped with a 250 mm lens. The International Space Station Program supports the laboratory to help astronauts take pictures of Earth that will be of the greatest value to scientists and the public, and to make those images freely available on the Internet. Additional images taken by astronauts and cosmonauts can be viewed at the NASA/JSC Gateway to Astronaut Photography of Earth.

Nearly six years of regional drought and rapidly increasing demand for water have resulted in decreasing water levels in lakes throughout East Africa. The flooded regions of the Toshka Lakes west of Lake Nasser have decreased greatly over the years, exposing the former dune fields, and leaving a “bath-tub ring” of wetlands (dark region) surrounding the lake shorelines.

Lake Nasser and the New Valley

Heavy rains in the source regions of the Nile in the 1990s resulted in record water levels in Lake Nasser. In 1997, Lake Nasser began flooding westward down a spillway into the Toshka depression in southern Egypt, creating four new lakes over the next few years. 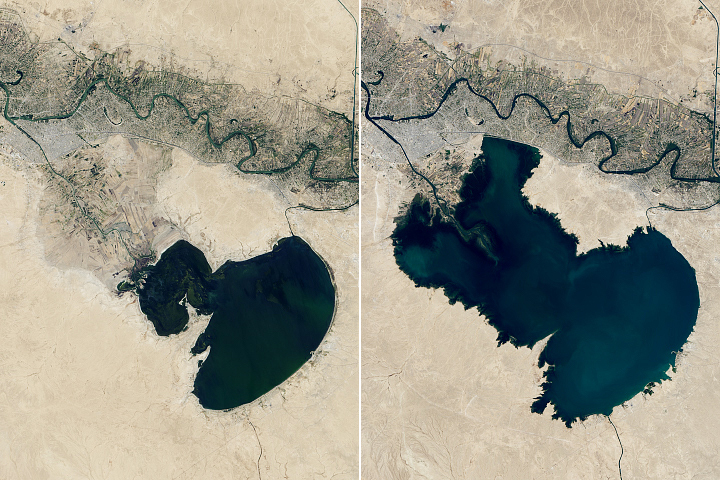 After decades of low water levels, two of Iraq’s popular lakes appear to be filling again.

Lake Orumiyeh is one of the world’s great salt lakes, but it is shrinking.