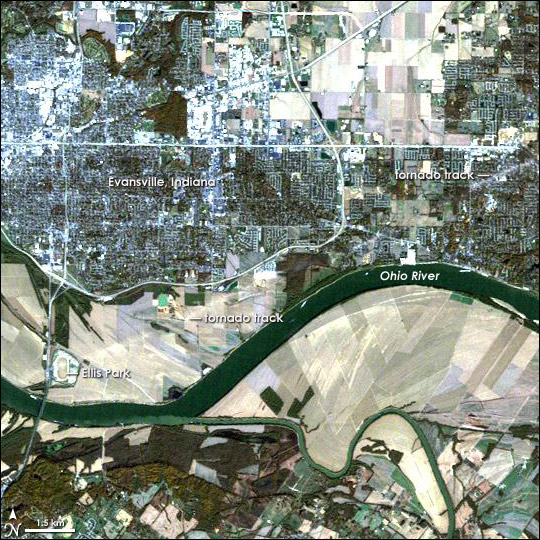 A large tornado cut a 66-kilometer (41-mile) swath of destruction across southern Indiana and northwestern Kentucky in the early morning hours of November 6, 2005. The tornado killed 23 and left at least 200 injured. Ranked a strong F2 or weak F3 on the Fujita Tornado Damage Scale, the storm destroyed more than 100 buildings and homes as it tore across the two states with winds estimated at 320 kilometers per hour (200 miles per hour) at about 2 a.m. Central Standard Time.

Four days later, on November 10, 2005, the Landsat 5 satellite captured this image of the storm-hit section of Indiana and Kentucky. A pale, interrupted stripe across the image—like someone dragged an eraser across the scene—shows the track the tornado made as it moved from southwest to northeast along the outskirts of Evansville, Indiana. The tornado’s track begins on the northern banks of the Ohio River on the lower left side of the image. It sliced across Ellis Park, the oval-shaped Churchill Downs horse-racing track, killing at least three horses stabled in the track’s barns, the Associated Press reported. The tornado then moved northeast across open fields into the neighborhoods southeast of downtown Evansville. Populated areas are cement white, black, and brown. Here, the contrast between the still-standing structures and the white swath of destruction becomes greater, making the tornado track easier to follow.

Every year, some 1,000 tornadoes strike the United States, though their toll has decreased as weather forecasts and warning systems have improved. The November 6 tornado was the deadliest to date in 2005. To learn more about tornado safety, please visit the National Oceanic and Atmospheric Administration’s National Weather Service web site. The National Weather Service’s Weather Forecast Office also provides an analysis of the November 6 tornado, including photos.