Navigating Icebergs in the Antarctic 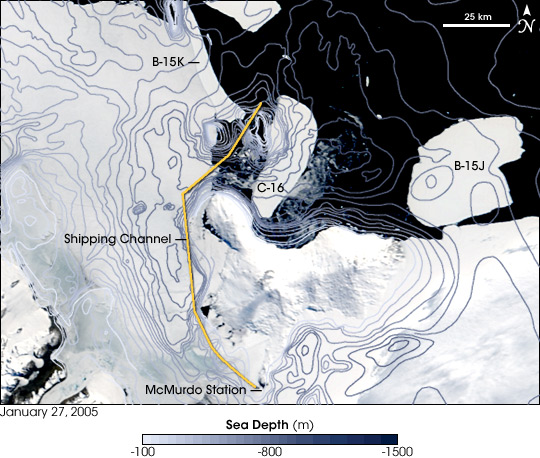 September heralds a shift away from the warm, lazy days of summer to the cooler, shorter days of autumn in the Northern Hemisphere. It is the time that kids return to school and adults get back to work. For polar scientists, it is time to pack for a new research season in the south. In Antarctica, September marks the return of the Sun for longer and longer periods each day, allowing the Moderate Resolution Imaging Spectroradiometer (MODIS) to get its first peek at the frozen continent in visible light (as opposed to only infrared) after the darkness of winter.

When the light broke over Antarctica in 2004, it revealed four massive icebergs blockading McMurdo Sound. The icebergs posed a significant challenge to those charged with charting a course through the sound to McMurdo Station, the U.S. research hub in Antarctica. Sitting along the shore of McMurdo Sound, the station’s supplies come from ships that have cut a long path through the sea ice.

The image shown here was taken on January 27, 2005. Daily imagery of McMurdo Sound, including the latest imagery from September 2005, are available from the MODIS Rapid Response Team. As the light begins to reveal conditions in September 2005, the images show that the largest of the icebergs has shifted away from the sound. This should make planning an easier task for the 2005-2006 season.

To read more about the use of MODIS imagery to supply U.S. research stations in Antarctica, see “Operation Antarctica” on the Earth Observatory.

The long voyage of one of the planet’s largest bergs—A-68A—has come to an end.

End of the Iceberg Life Cycle

Scientists rely on satellites to piece together the life stories of icebergs from Antarctica, some of which have been adrift for decades.