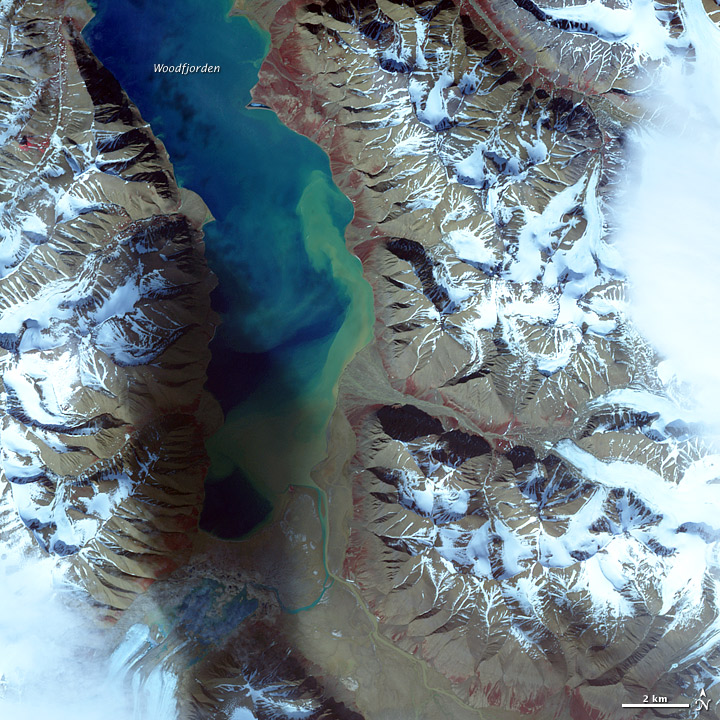 Far north within the Arctic Circle off the northern coast of Norway lies a small chain of islands known as Svalbard. These craggy islands have been scoured into shape by ice and sea. The effect of glacial activity can be seen in this image of the northern tip of the island of Spitsbergen. Here, glaciers have carved out a fjord, a U-shaped valley that has been flooded with sea water. Called Woodfjorden, the fjord is located at almost 80 degrees north, and it is still being affected by glaciers. The effect is most obvious in this image in the tan layer of silty freshwater that floats atop the denser blue sea water that fills the fjord. The fresh water melts off land-bound glaciers and flows over the sandstone, collecting fine red-toned silt. In this image, the tan-colored fresh water flows northward up the fjord, pushed to the east side of the fjord by the rotation of the Earth.

Glaciers here and elsewhere on Spitsbergen are cold bottom glaciers, which means that they are frozen to the ground rather than floating on top of a thin layer of melt water. The glaciers are also land glaciers since their terminus (end) lies on land, rather than floating on the water (a tidewater glacier). Land glaciers grow and retreat slowly, balancing fresh snow with the melting and draining of old ice. Their rate of growth or retreat can be affected by global warming. In most cases, including the glaciers around Woodfjorden, global warming has caused glaciers to retreat from increased melting. On the eastern side of Svalbard, however, glaciers are growing from enhanced snowfall. The reason for this pattern remains only one of many intriguing unanswered questions of Arctic science in the islands.

Silty glacial meltwater flows northward up the side of Spitsbergen’s Woodfjorden, pushed to the fjord’s eastern margin by the spin of the Earth.

The Tracy and Heilprin Glaciers may not be Greenland’s largest, but they are retreating fast.