A Weak El Niño Getting Weaker 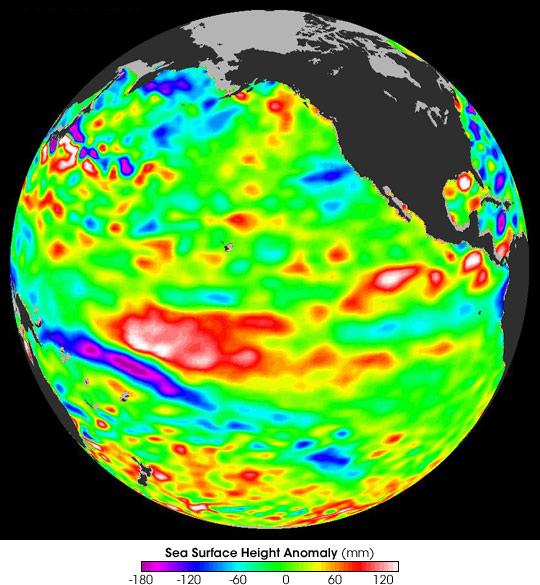 In mid-February, the central, equatorial Pacific Ocean continued to exhibit an area of higher-than-normal sea surface heights centered at 180° West, the International Dateline. This feature contrasted with lower-than-normal sea surface heights in the eastern equatorial Pacific. Sea-surface height corresponds to sea surface temperatures, with greater heights indicating warmer temperatures. The large red and white area to the southwest of image center is the warm anomaly; the smaller blue area to the right is the cool anomaly.

These sea-surface height data from the U.S./France Jason altimetric satellite during a 10-day cycle ending February 22, 2005, indicate a weak El Niño is dissipating, tending towards neutral conditions. The red area in the central equatorial Pacific indicates sea-level height is about 10 centimeters (4 inches) above normal. These red sea surface heights equate to sea surface temperature departures greater than one degree Celsius (two degrees Fahrenheit). Scientists will continue to monitor the Pacific closely for further signs of either El Niño or La Niña development

The image shows sea surface height anomalies with the seasonal cycle (the effects of summer, fall, winter, and spring) removed. The differences between what we see and what is normal for different times and regions are called anomalies. When oceanographers and climatologists view these anomalies they can identify unusual patterns and can tell us how heat is being stored in the ocean to influence future planetary climate events. The image is a 10-day average of data, ending on the date indicated.

El Niño: Pumping Up or Fizzling Out?

Sea-surface Height on the Rise