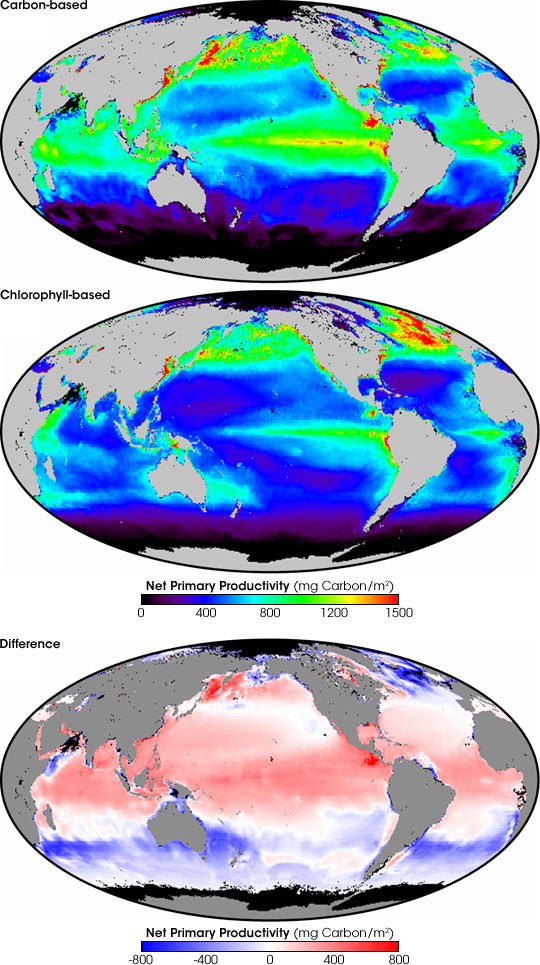 Earth’s oceans are a watery garden where fields of single-celled plants tinier than the period at the end of this sentence bloom, flourish, and fade with the changing of the seasons. Scientists named these life forms phytoplankton, from the Greek words phyto (plant) and plankton (drifter or wanderer). Just like their land-based cousins, these ocean drifters use energy from sunlight to turn carbon dioxide and water into sugars and oxygen. It’s this process (photosynthesis) that is important to climate scientists, who want to know how much atmospheric carbon these plants remove from the air.

Recently, scientists developed a new way to use satellite observations of the color of the ocean to estimate not only the amount of phytoplankton in the oceans but, for the first time, their seasonal growth rates as well. The images above show how the new technique changes the seasonal estimates of ocean primary productivity, the net intake of carbon by phytoplankton, for the Northern Hemisphere summer months of June-August. Among the most dramatic differences (bottom map) is that the year-round productivity of phytoplankton in the tropical oceans may be greater (red areas) than scientists originally thought.

Previously, scientists estimated global ocean productivity based on estimates of chlorophyll concentrations in the surface waters (middle image). Chlorophyll absorbs certain wavelengths of light more efficiently than others, so when those wavelengths “disappear” from the energy reflected by the ocean surface to the satellite, scientists can calculate how much chlorophyll is present. However, the presence of chlorophyll doesn’t always mean the phytoplankton are productive; changes in nutrient availability, sea surface temperature, and available sunlight change the plants’ growth rates and how much carbon dioxide they take in.

The new approach to estimating ocean productivity was developed by former NASA researcher Michael Behrenfeld, now with Oregon State University, and his colleagues. The approach introduces satellite observations in wavelengths of light that are known to be scattered off ocean particles, including phytoplankton. From the amount of backscatter, they can judge the number of particles present and relate that to the amount of phytoplankton carbon.

Behrenfeld and his colleagues put the particle backscattering observations together with traditional chlorophyll ones to give the first satellite-based estimates of ocean primary productivity that are based on phytoplankton physiology. To read more on this new approach to monitoring the biogeochemical cycles of Earth’s oceans, read The Mathematical Ocean: Deriving Planetary Health from Tiny Ocean Plants.

The sum of Earth's plants, on land and in the ocean, changes slightly from year to year as weather patterns shift. This pair of images contrasts average plant growth in 2002 to growth in 2008, revealing small interannual changes.