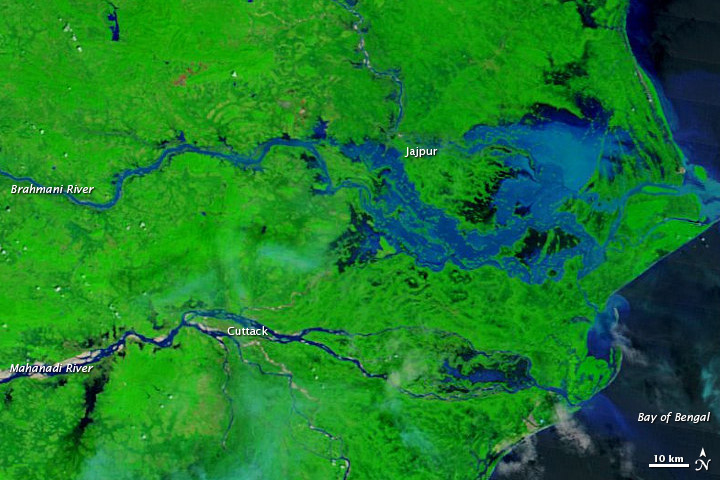 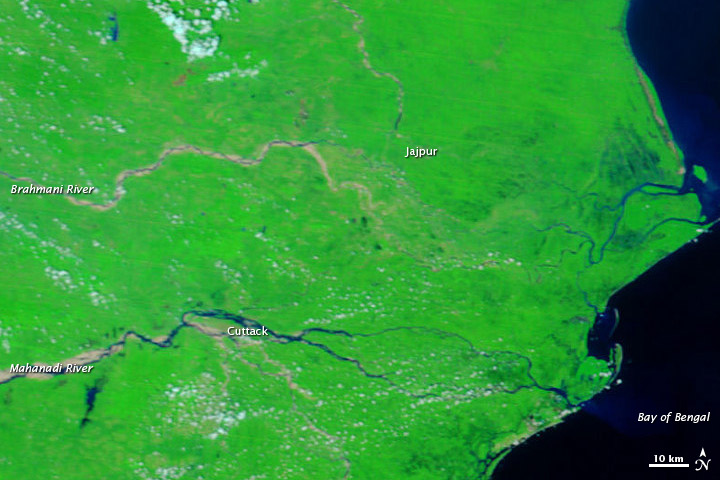 In September 2011, two episodes of heavy rain in a 15-day period inundated the Indian state of Orissa. On September 27, 2011, the Hindustan Times reported that the second period of heavy rainfall had claimed 27 lives.

The Moderate Resolution Imaging Spectroradiometer (MODIS) on NASA’s Terra satellite captured the top image on September 27, 2011. For comparison, the bottom image shows the same area a year earlier, on September 28, 2010. These images show parts of the Brahmani and Mahanadi Rivers near the Bay of Bengal.

Both images use a combination of infrared and visible light to increase contrast between water and land. Water varies in color from electric blue to navy. Vegetation is bright green. Bare ground is earth toned. Clouds range from off-white to pale blue-green.

The most striking difference between these images is the large expanse of flood water around the city of Jajpur. Jajpur District was hardest hit by the second round of flooding in September 2011, being cut off from overland transportation, according to The Hindu. A significant area of flood water also occurs along the Mahanadi River east of Cuttack.

At the mouth of the Brahmani River, water in the Bay of Bengal is much lighter in color in 2011 than in 2010. This may result from increased sediment loads in the flooded river.

ABC News Australia linked the floods to unusually heavy rains late in the monsoon season. By September 27, the Hindustan Times reported, flooding had eased somewhat in parts of Orissa, but many villages remained marooned. The government planned to continue air drops of food and supplies to isolated areas.

Acquired September 27, 2011, and September 28, 2010, these false-color images compare conditions along the Brahmani and Mahanadi Rivers in India. Severe flooding struck the region in 2011.

Heavy rains pushed rivers over their banks in the Indian state of Orissa in September 2011.

Acquired October 8, 2011, and October 10, 2010, these false-color images compare conditions along a stretch of the Ganga (Ganges) River, where flooding struck in 2011.

Acquired September 8, 2012, and September 23, 2009, these false-color images compare conditions along the Benue River, which flooded in 2012.

Before and After the Kerala Floods

Swollen rivers have altered the landscape in India’s state of Kerala.