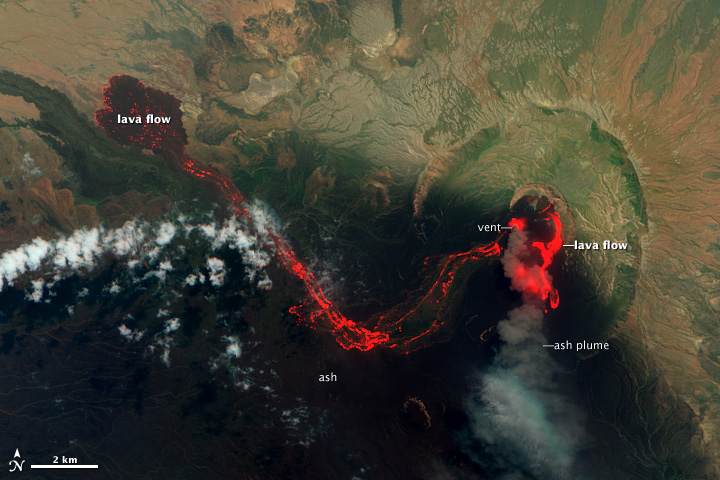 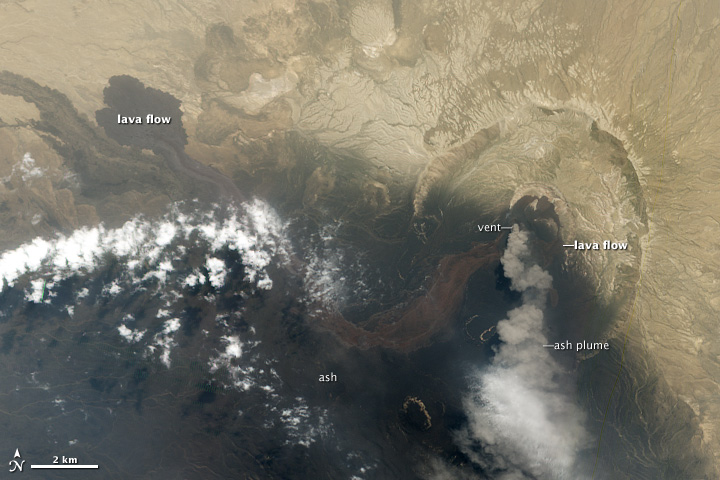 Since the beginning of the recent eruption, a dense plume of water vapor, gas, and ash has concealed the summit of the Nabro volcano. New images from June 29 finally provided a nearly unimpeded view of the summit, where lava flowed out of the erupting vent and down the slope of the volcano.

Located in the East African nation of Eritrea, Nabro began its eruption explosively on June 12, 2011. The powerful eruption sent plumes of ash streaming over North Africa and the Middle East, and pumped vast quantities of sulfur dioxide into the atmosphere. The ash halted flights in East Africa for a time. The eruption killed seven people, said the Eritrean government, and other reports indicate that thousands were affected in both Eritrea and Ethiopia, though news from the region is sparse.

More recently, the volcano has eased into a quieter, lava-oozing phase, as shown in these images from the Advanced Land Imager (ALI) on the Earth Observing-1 (EO-1) satellite. The top image shows the volcano in visible and infrared light (shortwave infrared, near infrared, and green). The hot lava glows orange-red, fading to black as it cools. The long flow on the west side of the volcano is mottled with black, a sign that the surface is cooling. The lava to the east and south of the vent appears to be newer, since little of it has cooled. It is possible that the cooling lava in the western flow diverted the fresh lava to the south and east.

The lower image provides a natural color view of the volcano. A small, slightly brown plume rises from the vent, and ash blackens the ground to the west and south.

Throughout the eruption, satellite images have been nearly the only source of new information about activity at the volcano. Detailed images like this one provide insight into how erupting lava is behaving. For example, volcanologist Erik Klemetti used previous images from ALI to estimate how quickly the lava is moving and to guess at how thick (viscous) the lava is.

The Nabro volcano has not erupted in recorded human history, but lava flows near the volcano are relatively recent geologically. Nabro is part of the very active East African Rift, where three tectonic plates are pulling away from each other. As the Earth’s crust thins in the region, volcanoes rise in weak spots.

This detailed image from June 29, 2011, provides a nearly unimpeded view of lava flows at the erupting Nabro volcano in Eritrea.

In early June 2011, Nabro stratovolcano in Eritrea began its first eruption in recorded history and first in perhaps 10,000 years.

This pair of satellite images was among the first detailed pictures of the erupting vent and lava flows.

In early September 2007, Tanzania&#rsquo;s Ol Doinyo Lengai Volcano erupted, sending a cloud of ash into the atmosphere. The volcanic plume appears pale blue-gray, distinct near the summit, and growing more diffuse to the south. The charcoal-colored stains on the volcano’s flanks appear to be lava, but they are actually burn scars left behind by fires that were spawned by fast-flowing, narrow rivers of lava ejected by the volcano.