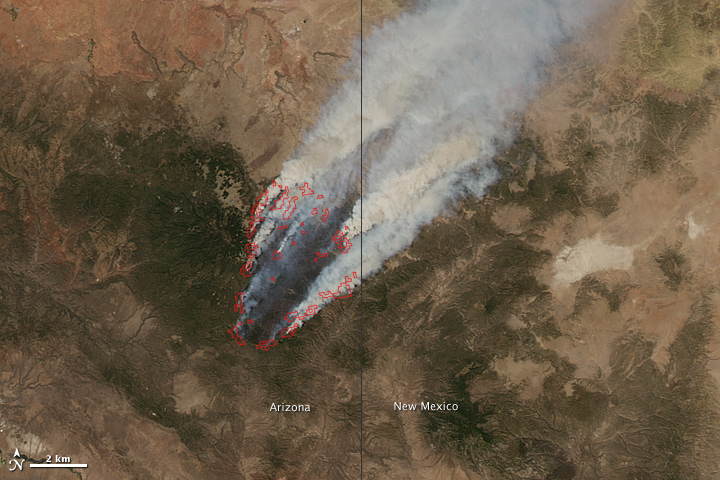 The Wallow Fire has become the second largest fire in Arizona history. By early afternoon on June 8, 2011, the fire had consumed 389,000 acres (608 square miles), largely in the Apache National Forest, and was not at all contained. This image, taken by the Moderate Resolution Imaging Spectroradiometer (MODIS) on the Aqua satellite, shows the fire at 1:25 p.m. local time.

The actively burning fire front (outlined in red) surrounds a vast area of charred land. High winds propelled the fire, igniting spot fires as much as three miles ahead of the fire front on June 8, said the Arizona Emergency Information Network. Dense plumes of smoke billow from the fire and stream northeast in the strong winds. The smoke has been affecting air quality through much of the United States.

The Wallow Fire started because of human activity on May 29. It has forced evacuations from several eastern Arizona communities including Sunrise, Greer, Blue River, Alpine, Nutrioso, Eager, and Springerville. As of June 8, the fire has threatened 588 structures and destroyed 11.