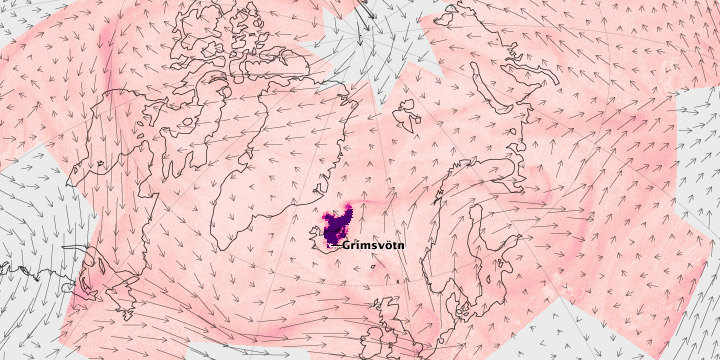 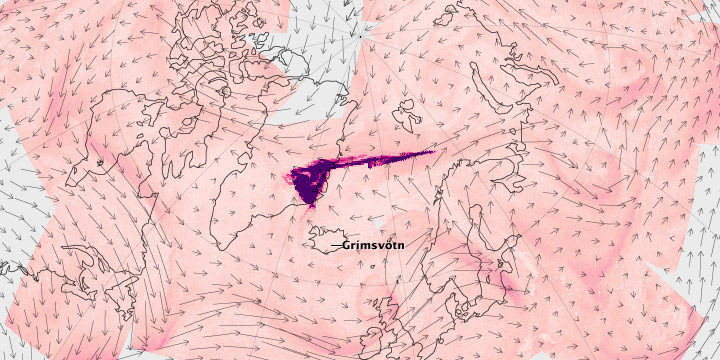 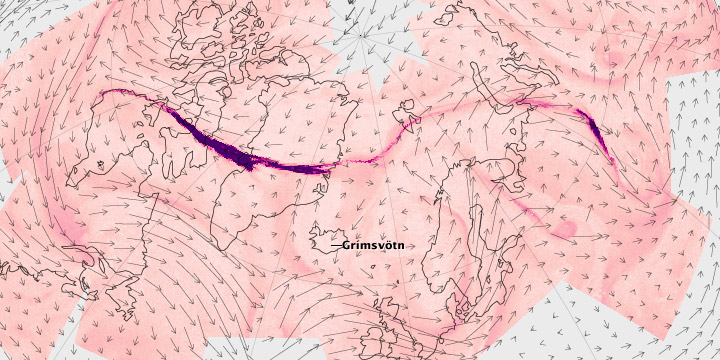 Sulfur dioxide, or SO2, is a colorless, pungent gas that can be both air pollutant and important atmospheric component, depending on where it resides. Along with water vapor and carbon dioxide, sulfur dioxide is one of the most abundant gas emissions during volcanic eruptions.

The images above, along with the linked animation, show the emission and transport of sulfur dioxide from the Grímsvötn Volcano in Iceland at the end of May 2011. The images are based on measurements from the Atmospheric Infrared Sounder (AIRS) on NASA’s Aqua spacecraft that were input into the Goddard Earth Observing System, Version 5 (GEOS-5) experimental model, which characterizes the background wind fields. The concentration of SO2 is represented in purple, with the small arrows depicting dominant wind direction.

As the days pass, the plume spreads north and then thousands of kilometers to the east and west, carried by complex polar winds in the upper atmosphere. In the animation, the plume is still visible over Canada nearly five days after the eruption, when the polar jet stream starts carrying the SO2 east again.

Sulfur dioxide near the surface of Earth can harm human breathing, particularly for people with asthma. It also blends with water in the atmosphere to produce acid rain and volcanic smog, or vog. After an eruption, sulfur dioxide aerosols at higher altitudes can corrode and damage aircraft windows, though they do not necessarily pose an immediate hazard to aircraft operations.

When injected into higher reaches of the atmosphere, SO2 can react with other gases and particles to create aerosols that block sunlight and can cool the climate. That's not likely in this case, as the eruption that began on May 21, 2011, ended by May 28, according to the Icelandic Met Office.

A NASA satellite caught this glimpse of a plume rising and drifting from the Icelandic volcano in May 2011.

On May 21, 2011, Iceland’s Grímsvötn Volcano erupted, sending an ash plume 20 kilometers (12 miles) high. The eruption had subsided by May 26th.

Tracking the Sulfur Dioxide from Calbuco

Along with copious amounts of ash, the volcano in Chile has been spewing sulfur dioxide gas that can have effects on climate.