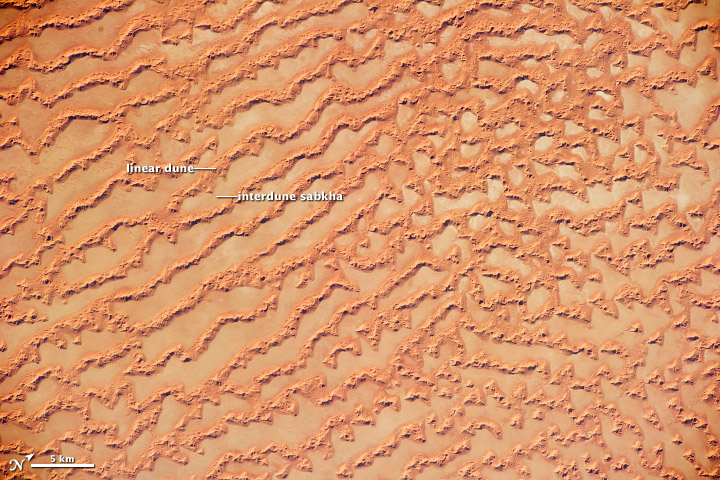 The Ar Rub’ al Khali, also called the “Empty Quarter,” is a large region of sand dunes and interdune flats known as a sand sea or erg. This astronaut photograph highlights a part of the Ar Rub’ al Khali near its southeastern margin, in the Sultanate of Oman.

Large, linear reddish-brown sand dunes alternate with interdune salt flats, or sabkhas. The orientation of the linear dunes lies at a right angle to northwesterly trade winds that originate in Iraq, known as the Shamal winds.

Secondary barchan (crescent-shaped) dunes and star dunes—with crests originating from a single point and stretching in several directions—can form atop the linear dunes when southwesterly winds blow during the monsoon season (Kharif winds). The long, linear dunes begin to break up into isolated large star dunes to the northeast and east (image right). This is likely the result of wind pattern interactions and of changes in the sand supply.

The Empty Quarter covers much of the south-central portion of the Arabian Peninsula, and with an area of approximately 660,000 square kilometers, it is the largest continuous sand desert on Earth. The Empty Quarter was so named because the hyperarid climate and difficulty of travel through the dunes has long discouraged permanent settlement within the region. There is geological and archeological evidence of cooler and wetter climates and human settlements in the region in the past. This evidence includes exposed lakebed sediments, scattered stone tools, and the fossils of hippopotamus, water buffalo, and long-horned cattle.

Astronaut photograph ISS027-E-34290 was acquired on May 16, 2011, with a Nikon D3S digital camera using a 200 mm lens, and is provided by the ISS Crew Earth Observations experiment and Image Science & Analysis Laboratory, Johnson Space Center. The image was taken by the Expedition 27 crew. The image has been cropped and enhanced to improve contrast. Lens artifacts have been removed. The International Space Station Program supports the laboratory as part of the ISS National Lab to help astronauts take pictures of Earth that will be of the greatest value to scientists and the public, and to make those images freely available on the Internet. Additional images taken by astronauts and cosmonauts can be viewed at the NASA/JSC Gateway to Astronaut Photography of Earth. Caption by William L. Stefanov, NASA-JSC.

The Ar Rub’ al Khali, or Empty Quarter, covers much of the south-central portion of the Arabian Peninsula and is the largest continuous sand desert on Earth.