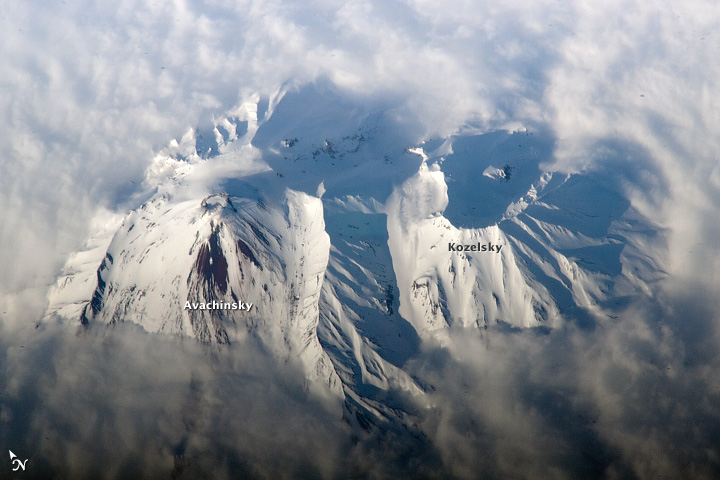 The Kamchatka Peninsula of Russia, located along the Pacific “ring of fire,” includes more than 100 volcanoes. While most of these volcanoes are not actively erupting, many are considered dangerous due to their eruptive history and their proximity to population centers and air travel corridors. This astronaut photograph highlights the summit crater and snow-covered slopes of the Avachinsky stratovolcano as it pokes above a surrounding cloud deck.

The 2,741 meter (8,993 foot) high Avachinsky volcano has an extensive historical and geological record of eruptions. The latest activity occurred in 2008.

The large city of Petropavlovsk, Kamchatka, is located approximately 25 kilometers (15 miles) to the southwest and is built over approximately 30,000–40,000 year old debris deposits from an avalanche that originated at Avachinsky—suggesting that the city may be at risk from a similar hazard in the future. To the southeast (image right), the large breached crater of Kozelsky Volcano is also visible above the clouds. Kozelsky is a parasitic cone, formed by the eruption of material from vents along the flank of Avachinsky.

The topography of the volcanoes is accentuated by shadows caused by the relatively low sun angle, and by the oblique viewing angle. Oblique images are taken looking outwards from the International Space Station, rather than the “straight down” (or nadir) view typical of most Earth-observing sensors.

Astronaut photograph ISS027-E-20395 was acquired on May 2, 2011, with a Nikon D2Xs digital camera using an 800 mm lens, and is provided by the ISS Crew Earth Observations experiment and Image Science & Analysis Laboratory, Johnson Space Center. The image was taken by the Expedition 27 crew. The image has been cropped and enhanced to improve contrast. Lens artifacts have been removed. The International Space Station Program supports the laboratory as part of the ISS National Lab to help astronauts take pictures of Earth that will be of the greatest value to scientists and the public, and to make those images freely available on the Internet. Additional images taken by astronauts and cosmonauts can be viewed at the NASA/JSC Gateway to Astronaut Photography of Earth. Caption by William L. Stefanov, NASA-JSC.

This astronaut photograph highlights the summit crater and snow-covered slopes of the Avachinsky stratovolcano as it pokes above a surrounding cloud deck.

This photograph of snow-covered volcanoes on Russia’s Kamchatka Peninsula illustrates one of the unique attributes of the International Space Station—the ability to view landscapes at an angle, rather than the straight down view typical of many satellite-based sensors.

This photograph from the ISS highlights one of the most active volcanic regions on Earth: the Kamchatka Peninsula in far eastern Russia.

Some of the world’s most active volcanoes make up the spine of the Kamchatka Peninsula in far east Russia. Kamchatka is the northwestern edge of the Pacific “ring of fire,” where earthquakes and volcanism are caused by ongoing subduction of the Pacific oceanic plate beneath the Eurasian plate. This astronaut photograph profiles the summit area of Ksudach Volcano, also called Voniuchi Khrebet Volcano, in southern Kamchatka. White snow on the ridges in this image contrasts with the dark volcanic soils and highlights the well-developed radial drainage pattern down the slopes of the volcano.