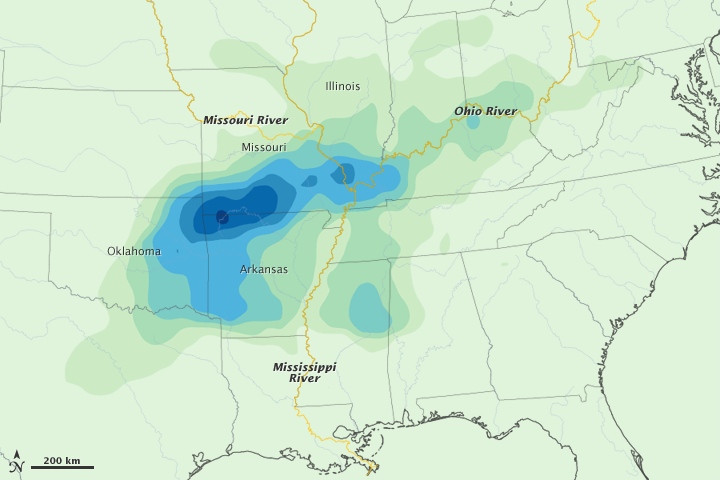 With rivers in the Midwestern United States already full from thawing winter snow cover, severe rainfall in late April added to the troubles for the region. The National Weather Service predicted in February that the region was primed for flooding, and so far it has lived up to the advanced billing. On the afternoon of April 26, 2011, the Advanced Hydrological Prediction Service (AHPS) was reporting major flooding at 48 river gauges and moderate flooding at 86 gauges along central U.S. rivers.

This map depicts rainfall for the Midwestern U.S. from April 19 to 25, 2011. The estimates were made from the Multi-satellite Precipitation Analysis, based on data from the Tropical Rainfall Measuring Mission (TRMM). Shown in shades of green and blue, rainfall estimates range from 150 millimeters (5.9 inches) to greater than 525 millimeters (20.7 inches).

Ground monitors for the AHPS reported 13.70 inches (348 mm) of rainfall in the southeastern Missouri town of Poplar Bluff between April 22-26. The nearby Black River was pouring over its levee in at least 30 places, and people were evacuated from more than 1,000 homes.

Westville, Oklahoma, received 14.96 inches (380 mm) of rain. In Arkansas, the town of Springdale was deluged with 19.70 inches (500 mm), while nearby Fayetteville collected 13.85 inches (352 mm). The governor of Arkansas declared a state of emergency.

In Carbondale, Illinois, and Paducah, Kentucky—both near the confluence of the Mississippi and Ohio rivers—roughly 9 inches (230 mm) fell, leading the governor of Kentucky to declare a state of emergency in advance of a significant flood when the two swollen rivers converge. The U.S. Army Corps of Engineers was planning on April 26 to “take the extraordinary step of intentionally breaching the Birds Point levee in southeast Missouri, just downriver of the confluence, in a bid to reduce the amount of water moving down the Mississippi,” the Associated Press reported. Breaching the levee was expected to flood up to 130,000 acres of farmland.

NOAA's Hydrometeorological Prediction Center was predicting more heavy rain and severe weather through mid-week in the Mississippi and Ohio river valleys; flood warnings and watches were posted for both basins, as well as the Tennessee Valley. On April 25, the rains were accompanied by at least 38 tornadoes, according to the National Weather Service, and conditions were ripe for more in the coming days.

This map depicts rainfall for the Midwestern U.S. from April 19 to 25, 2011, when severe rains added to spring melt to bring dozens of rivers above flood stage.

A dip in the jet stream pulled moist, tropical air from the Caribbean to the Eastern Seaboard and triggered several days of intense rains.

Floods in the Midwestern United States 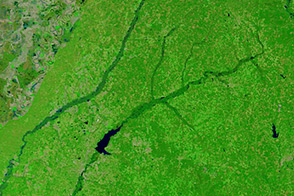 The Terra satellite acquired this false-color image of the swollen Pearl and Big Black rivers after passing storms triggered flooding.