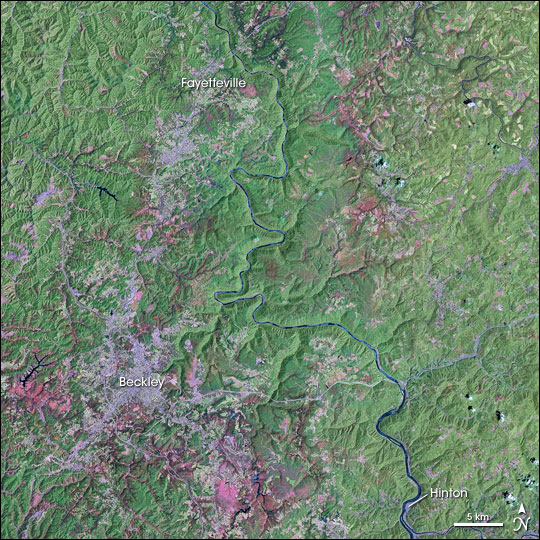 In southern West Virginia, the New River carves a rugged, steep-sided gorge through a plateau of ancient sandstone and shale. From its headwaters high in the mountains of North Carolina, the New flows northward hundreds of miles through Virginia and into West Virginia. The name is unintentionally ironic because the New is probably one of the oldest rivers in North America. In West Virginia, the New River (running south to north through image center) has sliced a canyon that reaches 1,600 feet at its maximum depth, exposing layers of rock created more than 300 million years ago. The “puckered” look of the canyon walls at various locations highlights the ruggedness of the terrain; the puckers are numerous ravines that serrate the canyon rim.

In 1978, Congress declared 53 miles of the New River, including the New River Gorge, between Hinton and Fayetteville to be a National Scenic River, thus protecting the river and some 73,000 acres of forest along its banks as national park land. This image shows the stretch of river between Hinton, where the National Scenic River boundary begins, and Fayetteville. The river winds north through many rapids and is surrounded by deep green forested canyons up to and past Fayetteville.

Other prominent features in this image are the light purple patches of towns and cities, and the corridor of homes and communities along major highways between these towns. Hinton sits right on the river, but to the north, it is more than the National Park designation that prevented similar settlements: here the Gorge is so steep that the small coal mining towns that used to cling to the sides of the mountains never grew into cities, and they were abandoned when the coal boom died. Today, larger towns and cities are located on top of the plateau. Brilliant pinks outside Beckley are deforested areas around major coal mining operations, including controversial mountaintop removal sites.

The scenic beauty of this area has made it a popular wilderness destination. The steep canyon of the river provides challenging hikes, rock climbing, and rappelling sites, and the river itself is a popular destination with white-water rafters and kayakers. Until 2003, the bridge over the river in Fayetteville (top of scene) was the largest steel-arch bridge in the world, and one of the area’s most popular annual attractions is Bridge Day, celebrated each year in mid-October at the height of the fall leaf display. “BASE” jumpers take advantage of the one-day event to parachute off the 876-foot span.

The image above was created from data collected by the Landsat 7 satellite's Enhanced Thematic Mapper Plus (ETM+) instrument and mosiacked together for the entire North American continent using cloud free scenes collected during the year 2000. This simulated true color image was created by combining the shortwave infrared, near infrared, and green wavelengths (ETM+ bands 7, 4, and 2), pan sharpening them, and then applying color adjustments to bring the resulting image to a near natural color appearance.

Cliffs, waterfalls, and a wide mix of vegetation line a river that winds through the Great Plains in Nebraska.