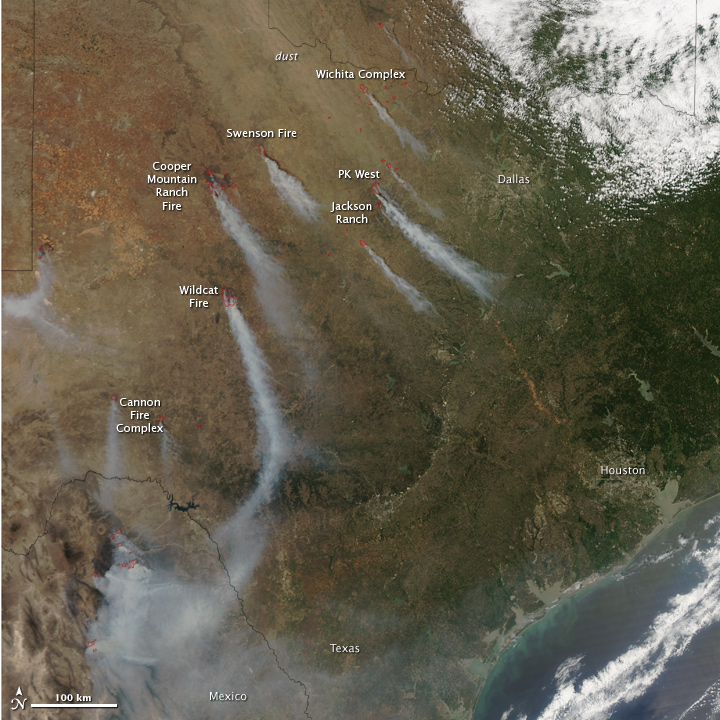 Since April 6, more than a million acres have burned throughout the state of Texas, according to the Texas Forest Service. This image, taken by the Moderate Resolution Imaging Spectroradiometer (MODIS) on NASA’s Aqua satellite, shows conditions on April 15, 2011. Wind whipped both smoke and dust southeast across the state. The fires detected by MODIS are marked in red.

The image illustrates one of the primary reasons fire danger is extremely high in Texas: strong winds. Warm temperatures, dry vegetation, and low humidity are also contributing to hazardous fire conditions. Normally a rainy month, March 2011 was the driest March on record, said the Texas Forest Service. Plentiful rains in 2010 spurred grass and shrubs to grow. The recent lack of rain, warm temperatures, and low humidity have turned all of that vegetation into dry tinder, creating unprecedented fire danger.

As of April 18, at least 23 large wildfires were burning in Texas. Seven of the largest are labeled in the image. The image also shows two wildfires burning in northern Mexico. So far in 2011, firefighters have responded to 7,807 fires, which have burned 1,528,714 acres of land and 244 structures, said Governor Rick Perry in an April 16 request to President Obama for a federal declaration of a major disaster.

Most of the seven fires shown in the image are larger than ten thousand acres, and many have threatened communities. As of April 18, the Texas Forest Service reported their status as follows:

This Landsat image, taken on May 2, 2011, shows all 314,444 acres burned in the Rockhouse Fire in southwestern Texas.

The Rock House Fire stretches in a long line around the town of Fort Davis, Texas, in this true-color image taken on April 10, 2011.