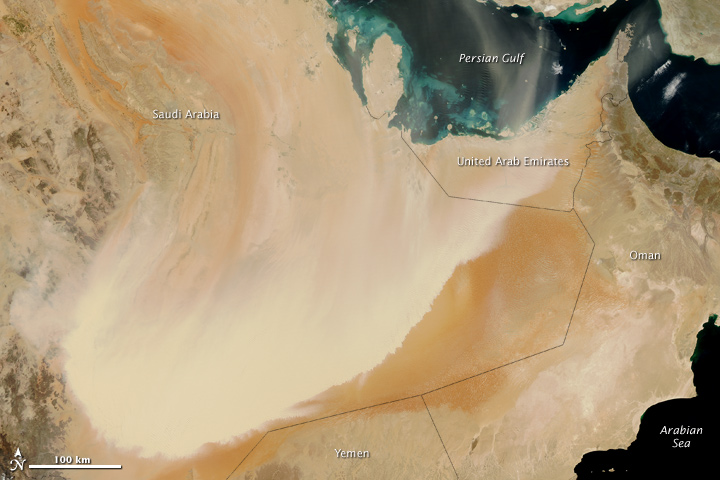 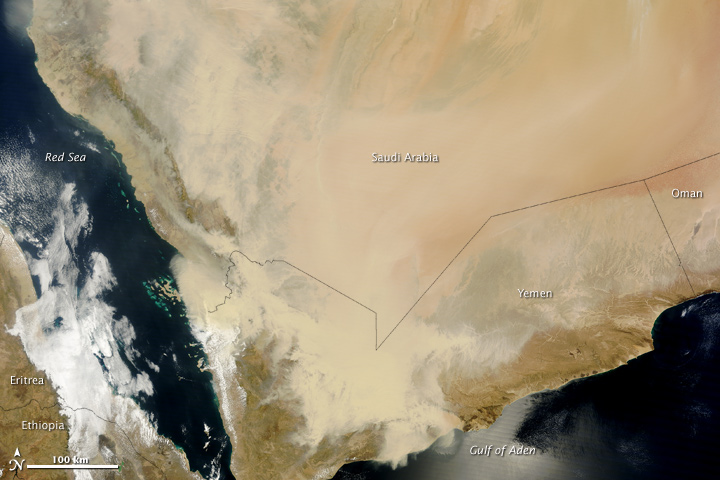 A dense wall of dust barreled across the Arabian Peninsula on March 26-27, 2011. The massive storm stretches more than 500 kilometers (300 miles) across the peninsula, covering parts of Saudi Arabia, Yemen, Oman, and the United Arab Emirates.

On March 26, the storm stops short of Oman and Yemen, and the opaque mass of dust is bordered by crystal-clear skies to the south. Some plumes blow across the Persian Gulf toward Iran. The following day, the dust has moved southward, and is especially thick over Yemen.

According to local news reports, the storm started in the late afternoon on March 25 in Iraq and Kuwait. The fast-moving storm dropped visibility to near zero, cloaking Kuwait in premature darkness. The dust storm shut down the airport in Kuwait and disrupted traffic across the Arabian Peninsula.

Intense northwest winds called shamal winds drove the fast-moving storm. They blow in from the northwest with the passing of a storm with a strong cold front, which is the leading edge of a mass of cold air. In this case, the cold front was over Iraq. It brought winds greater than 50 kilometers per hour (30 miles per hour) to Kuwait and slightly weaker winds to the rest of the region.

The winds picked up dust and sand from Iraq and Kuwait and blew it across the peninsula. The storm may have also picked up material over the Empty Quarter (Rub’ al Khali). An incredibly rich sand sea, the Empty Quarter contains about half as much sand as the Sahara Desert.

A wall of dust barrels across the Arabian Peninsula in these true color images from March 26 and March 27, 2011.

A massive dust storm moved southward over the Arabian Peninsula in late March 2011.

Dust Storm over the Persian Gulf

Dust blew over parts of Iraq, Iran, Saudi Arabia, Qatar, and all of Kuwait in early June 2012. 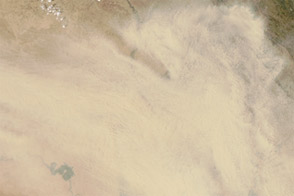 Acquired May 24, 2012, this natural-color image shows dust engulfing most of Iraq and Kuwait.