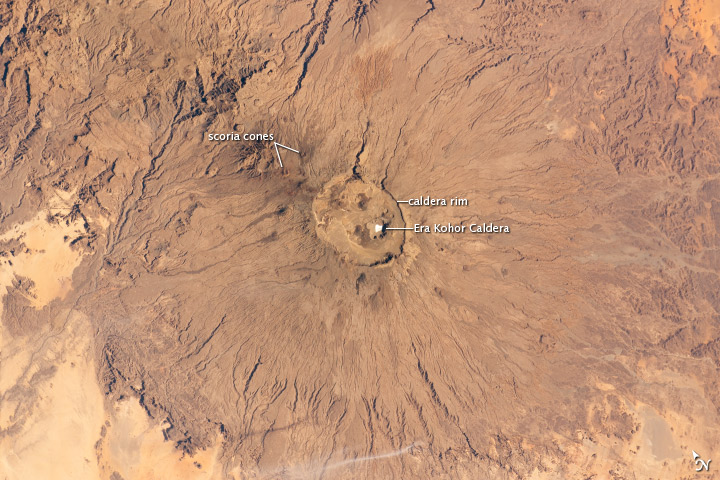 The broad Emi Koussi volcano is a shield volcano located in northern Chad, at the southeastern end of the Tibesti Range. The dark volcanic rocks of the volcano provide a sharp contrast to the underlying tan and light brown sandstone exposed to the west, south, and east (image lower left, lower right, and upper right).

This astronaut photograph highlights the entire volcanic structure. At 3,415 meters above sea level, Emi Koussi is the highest summit of Africa’s Sahara region. The summit includes three calderas formed by powerful eruptions. Two older and overlapping calderas form a depression approximately 12 kilometers by 15 kilometers in area bounded by a distinct rim (image center). The youngest and smallest caldera, Era Kohor, formed as a result of eruptive activity within the past 2 million years.

Young volcanic features, including lava flows and scoria cones are also thought to be less than 2 million years old. There are no historical records of eruptions at Emi Koussi, but there is an active thermal area on the southern flank of the volcano.

Astronaut photograph ISS026-E-17074 was acquired on January 11, 2011, with a Nikon D2Xs digital camera using a 70 mm lens, and is provided by the ISS Crew Earth Observations experiment and Image Science & Analysis Laboratory, Johnson Space Center. The image was taken by the Expedition 26 crew. The image has been cropped and enhanced to improve contrast. Lens artifacts have been removed. The International Space Station Program supports the laboratory as part of the ISS National Lab to help astronauts take pictures of Earth that will be of the greatest value to scientists and the public, and to make those images freely available on the Internet. Additional images taken by astronauts and cosmonauts can be viewed at the NASA/JSC Gateway to Astronaut Photography of Earth. Caption by William L. Stefanov, NASA-JSC.

At 3,415 meters above sea level, the summit is the highest of Africa’s Sahara region.

Though there are no historical accounts, geologic evidence suggests an eruption about 3,100 years ago affected Pre-Columbian settlements in Mexico.

Tolbachik Volcano is not a single peak, but a complex of volcanic features superimposed on one another.