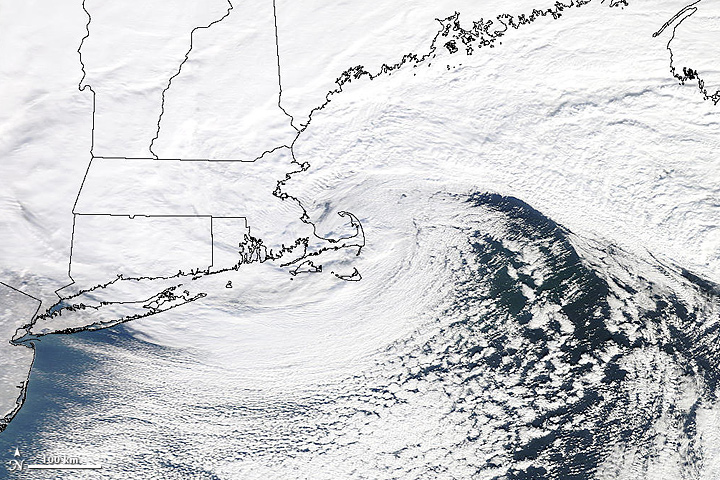 A classic Nor’easter plowed up the East Coast of the United States on January 12, 2011, dumping heavy snow on New England states for the third time in three weeks. The storm began developing late on January 11, as a snow-making system that had hit the southern U.S. rode up the Atlantic seaboard and merged with another system crossing from the Midwest. The Moderate Resolution Imaging Spectroradiometer (MODIS) on NASA’s Terra satellite took this photo-like image at 10 a.m. Eastern Standard Time on January 12, when the storm was centered over southern New England.

The storm had a distinctive comma shape—reminiscent of a hurricane—that forms when air circles around a low-pressure center. Though not apparent in the image, the storm had something akin to an eye, and skies over Nantucket, Martha's Vineyard, and Cape Cod, Massachusetts, briefly brightened with sunlight in the middle of the storm. Higher, thinner clouds swept around the south side of the storm, circling counterclockwise around the center. These lines of clouds formed when frigid winds blowing off the land chilled the moist ocean air.

The air circling the storm center from the north came in off of the ocean, where it picked up moist air. The dense clouds on the north and west side of the storm carried intense snow. The places where these clouds dominate the image—Maine, New Hampshire, Vermont, eastern New York, Massachusetts, Connecticut, and Rhode Island—were hit hard with snow falling as fast as 3 inches an hour, according to the National Weather Service. More than 24 inches (61 centimeters) of snow had fallen in parts of New England by the evening of January 12.

The powerful snow storm brought gale-force winds (over 39 miles per hour, or 63 kilometers per hour) to many coastal areas and claps of thunder in others. A gust of 66 miles per hour was recorded on Nantucket. Blizzard conditions—snowstorms with visibility less than one-quarter mile and winds at gale force for more than three hours—developed in parts of Massachusetts and Connecticut. The strong winds combined with heavy snow left more than 100,000 people without electric power, and led to the shutdown of parts of Interstate 95 and northeastern railroad service. Bradley International Airport near Hartford, Connecticut, set a one-day record with 22.5 inches (57 centimeters) of snow. Wilmington, Vermont, received 36 inches of snow in one day. 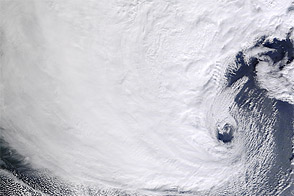 The Mid-Atlantic states were completely white on Sunday, December 20, 2009, in the wake of a record-breaking snow storm.