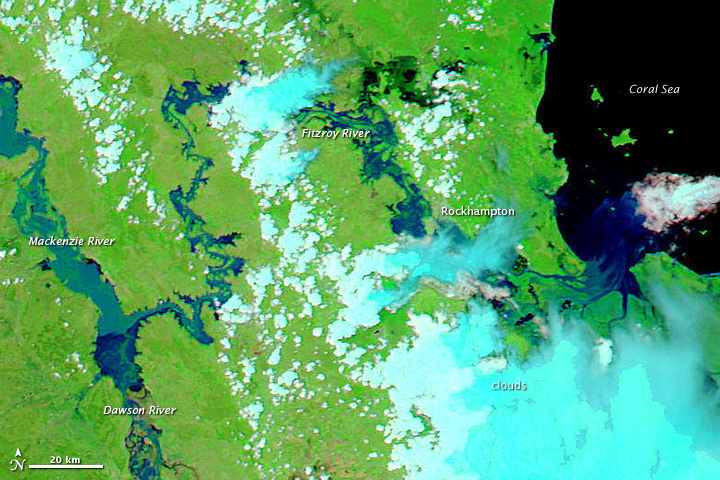 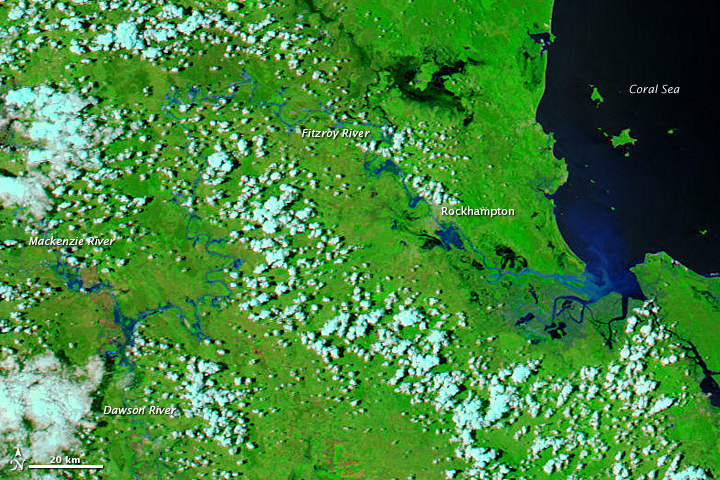 Rivers in Australia’s Fitzroy Basin were swollen when the Moderate Resolution Imaging Spectroradiometer (MODIS) on NASA’s Aqua satellite captured the top image on January 4, 2011. The lower image, taken on December 14, 2010, shows the basin before the flooding started. The contrast between the two images indicates the severity of the flooding.

Both images were made with true color and infrared light, in a combination that highlights the presence of water on the ground. Water is usually black in this type of image, but the rivers here are tainted blue by thick sediment. The most extreme flooding occurs where the Mackenzie and Dawson rivers flow together to form the Fitzroy River.

Damaging floods hit the city of Rockhampton, the pale tan area that spans the Fitzroy. The river’s straight, well-defined channel through the city indicates some measure of flood control. North of the city, however, the river burst its bank and surrounded Rockhampton on the northwest. Similar flooding appears to be happening south of the city, but clouds (turquoise and white) obscure the view. As of January 5, the swollen river had closed the airport and a highway south of the city, and forced about 500 people to evacuate flooded neighborhoods, reported the Australian Broadcasting Corporation (ABC) News.

According to the Australian Bureau of Meteorology, the Fitzroy River reached a peak of 9.2 meters (30 feet) in the city of Rockhampton on January 4, and maintained that level through January 5. The river is considered flooded when it reaches 7 meters (23 feet). Forecasters expected the river to remain at 9.2 meters (30 feet) through January 6, and above the “major flood” level of 8.5 meters (28 feet) for another week.

The floods are part of a larger event in Queensland, where the Australian Bureau of Meteorology had issued flood warnings for eight rivers. Floods throughout Queensland affected more than 200,000 people in 40 communities, reported ABC News. Unusually heavy La Niña rains caused the floods, but they also allowed the country to green up after a multi-year drought.

Rivers in Australia’s Fitzroy Basin are swollen in this false-color image acquired on January 4, 2011.

Though water levels had started to subside, the Australian city of Rockhampton was still inundated when this image was taken on January 7, 2011.

The city of Rockhampton is bracing for major flooding.

This rainfall map shows the concentrated area of intense rain that led to devastating flash flooding in Queensland, Australia, on January 10, 2011.