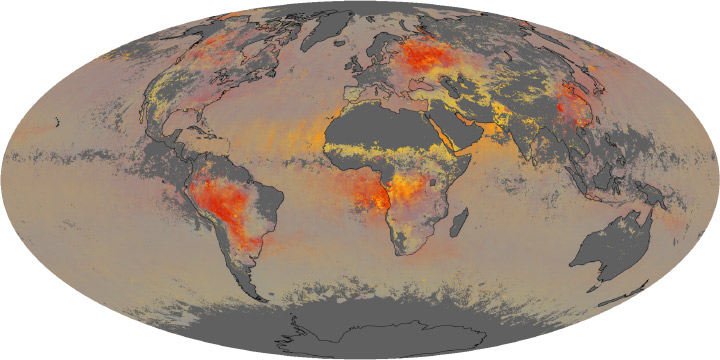 Tiny solid and liquid particles—some you can see, some you cannot—can be found in the air everywhere on the planet, at any time of year. The amount of particles, known to scientists as aerosols, fluctuates naturally with the seasons and natural events, as well as with human activities. Dust storms, volcanic eruptions, wildfires, and salt spray from the winds over the ocean are the most common and abundant producers of aerosols. Humans generate them, too, through the burning of fossil fuels, manufacturing processes, and fires for cooking, heating, and agricultural clearing.

This map shows the global distribution of aerosols in August 2010, and the proportion of those aerosols that are large or small. Yellow areas are predominantly coarse particles, like dust and sea salt, while red areas are mainly fine aerosols from smoke or pollution. Gray indicates areas with no data. The brighter or more intense the color, the higher the concentration of aerosols.

The map was compiled from data from the Moderate Resolution Imaging Spectroradiometer (MODIS) on NASA’s Terra and Aqua satellites.

Yellow bands—larger, coarse particles—around the Middle East, North Africa, and western North America likely indicate dust and sand storms as the northern hemisphere reaches the driest time of year. The bright red areas in Russia and much of South America reveal the intense wildfires and some agricultural burning, which coincided with hot summers and drought in several regions. The red patches in western Canada spring from summer wildfires, while China was likely coping with a combination of fire, dust, and pollution events. It is unclear what was happening in western Africa.

Of all the particles that fill our lungs on any given day, the most dangerous are the small ones. Aerosol particles smaller than 2.5 micrometers pose the greatest risk to human health because they are small enough to be breathed deep into the lungs and, in some cases, enter the blood stream. These fine particles, about 30 times smaller than the width of a human hair, are also a major cause of poor visibility.

Solid particles and liquid droplets in the air come in a range of sizes, but those smaller than 2.5 micrometers pose the greatest risk to human health.

Dust and Smoke off Africa

Dust and Smoke off Africa