SOHO Still Having a Blast 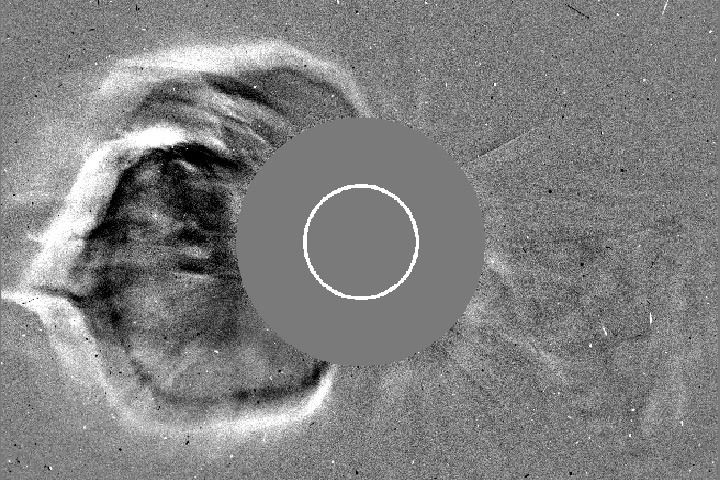 Fifteen years ago this month, the European Space Agency and NASA launched a satellite that fundamentally changed our understanding of the Sun and how it affects our planet. The Solar and Heliospheric Observatory (SOHO) became the first solar observatory to watch the sun 24 hours a day, seven days a week. It launched a revolution in the study of “space weather,” or how electromagnetic activity on the Sun disturbs and distorts technology on Earth.

This image from the Large-Angle Spectrometric Coronagraph (LASCO) on SOHO shows the eruption of a coronal mass ejection (CME)—an energized bubble of plasma from the Sun's atmosphere—in the general direction of Earth on August 7, 2010. The white circle in the middle shows the diameter and placement of the Sun behind the disk of the coronagraph (smooth gray circle), which creates an artificial eclipse to reveal the Sun's faint atmosphere. The white and black curves on the left show the halo effect of the plasma bubble as it pinches off from the eastern limb.

Unlike other SOHO images that show the Sun is bright reds, greens, and other artificial colors, this is a “difference image”; that is, it is a composite of two images where the earlier image is subtracted from a later one. The technique allows solar physicists to see the propagation of the plasma cloud across space, with the brightest whites showing areas of the highest density.

CMEs carry energized particles across the solar system, and when they cross paths with Earth, the result can be auroras (northern and southern lights), charging of the Van Allen radiation belts, and disturbances in the ionosphere, a layer of our atmosphere that is critical for the relay of radio signals. These space weather events can distort satellite communications and earth-based radio transmissions, cause satellite parts to fail, and create surges of current in electrical power lines—and sometimes blackouts.

Before SOHO and the International Solar Terrestrial Physics program of the 1990s, scientists and engineers couldn’t do much to prepare for space weather. But by providing a full-time view of solar activity, SOHO afforded earthlings as much as two or three days notice of an impending storm. Though its instruments have aged and newer satellites now have a better view, SOHO is still building a long-term record of solar observations.

Image courtesy of the Solar and Heliospheric Observatory/LASCO consortium. Caption by Michael Carlowicz.

Fifteen years ago this month, the European Space Agency and NASA launched SOHO, a satellite that fundamentally changed our understanding of the Sun and how it affects our planet.

Sunspots at Solar Maximum and Minimum

Our Sun experienced fewer sunspots in 2008 than it had since the 1957 launch of Sputnik. As of Sun-Earth Day on March 20, 2009, the Sun was continuing its quiet pattern.

Prominence from the Solar Dynamics Observatory