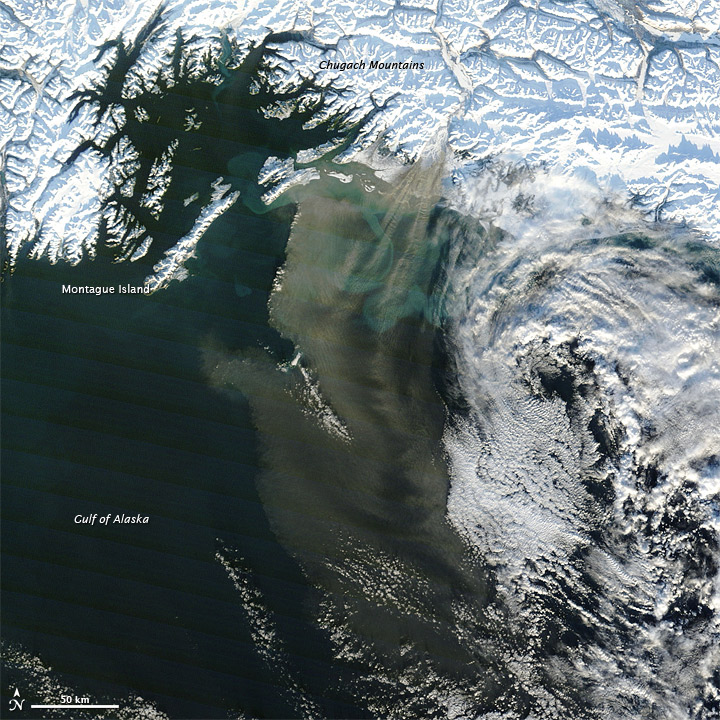 Just as it had two weeks earlier, dust blew off the coast of Alaska and over the Gulf of Alaska on December 1, 2010. The dust formed an arc, spanning hundreds of kilometers, curving toward the southeast. The Moderate Resolution Imaging Spectroradiometer (MODIS) on NASA’s Terra satellite captured this natural-color image the same day.

The dust just misses a cluster of islands along the Alaskan coast, and a line of small clouds dot the dust plume’s western margin. The plume is thin enough to reveal peacock green swirls in the ocean water below. Dust often fertilizes phytoplankton blooms, but whether that is true in this instance is uncertain.

Although dust storms often arise from sand seas, such as those of the Sahara or the Arabian Peninsula, dust can also result from the interactions of glaciers and bedrock. Multiple glaciers occur throughout the Chugach Mountains, which line the Gulf of Alaska. Rock pulverized into glacial flour can later be borne aloft by winds pushing through mountain valleys. 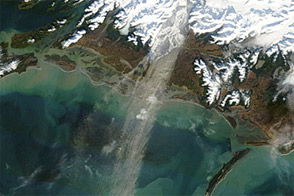 This image from early November 2011 shows a dust plume blowing off the coast of southern Alaska.

Dust over the Persian Gulf

Acquired May 4, 2011, this natural-color image shows a dust storm blowing off the Arabian Peninsula and over the Persian Gulf.