Dust blowing out of West Africa 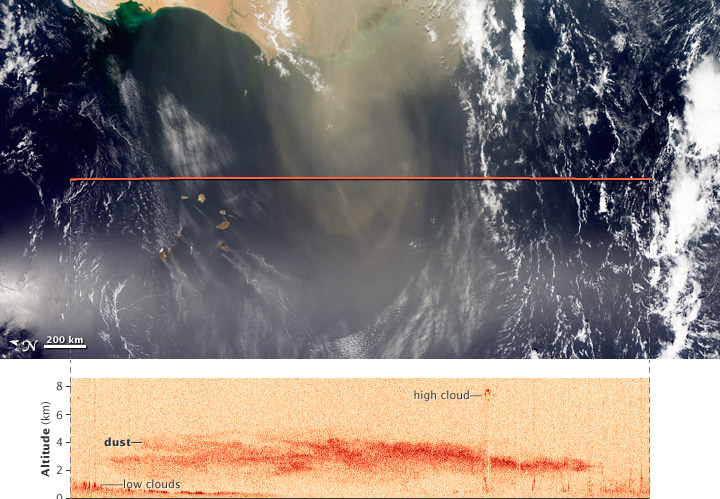 Aerosols are everywhere and they are an important (though poorly understood) part of Earth's climate story. These airborne solids and liquids spew from tailpipes and volcanoes, rise from wildfires and coal fires, and get whisked off the deserts and the sea surface by the wind. They can fertilize the ocean with dusty minerals, seed or stifle clouds, and darken the skies or the surface of ice.

In the past few decades, scientists have developed ever more sophisticated ways to measure the extent and concentration of aerosols in the atmosphere. For instance, these two images offer a horizontal and vertical view of a dust plume blowing from the deserts of North Africa out into the Atlantic Ocean on April 22, 2010. The top image from the Moderate Resolution Imaging Spectroradiomer (MODIS) on NASA's Aqua satellite provides a natural-color view of the extent of the plume. The bottom image comes from the Cloud Aerosol Lidar and Infrared Pathfinder Satellite Observer (CALIPSO), which uses light detection and ranging, or lidar, to measure the distribution of aerosols in a vertical slice of the atmosphere. The red line in the top image shows the flight path and vertical slice taken by CALIPSO.

The quest to measure aerosols is detailed in our new fact sheet on aerosols. The following is an excerpt:

Although it became clear about 40 years ago that aerosols could affect climate, the measurements needed to establish the magnitude of such effectsâ€”or even whether specific aerosol types warm or cool the surfaceâ€”were lacking.

The situation has improved considerably. Today scientists use an array of satellite, aircraft, and ground-based instruments to monitor aerosols. Radiometersâ€”instruments that quantify the amount of electromagnetic radiation (light)â€”are among the most important tools available. The key quantity they report is aerosol optical depth (AOD), a measure of the amount of light that aerosols scatter and absorb in the atmosphere.

Newer radiometers such as the Multi-angle Imaging Spectroadiometer (MISR) and the Moderate Resolution Imaging Spectroradiomer (MODIS) are capable of viewing aerosols at many angles and wavelengths, providing more accurate results.

Newer instruments also provide insight into properties of light. CALIPSO uses a laser-based technology that provides detailed vertical profiles of aerosol plumes and clouds. A French instrument, the Polarization and Directionality of the Earth’s Reflectances offers insight into the orientationâ€”or polarizationâ€”of light waves as they move through the atmosphere... An instrument even more sensitive to the polarization of light, the Aerosol Polarimetery Sensor, will gather additional insights after its launch aboard NASA’s Glory mission in 2011.

Satellite instruments such as CALIPSO can measure the distribution of aerosols in a vertical slice of the atmosphere, as with this dust plume off the west coast of Africa on April 22, 2010.