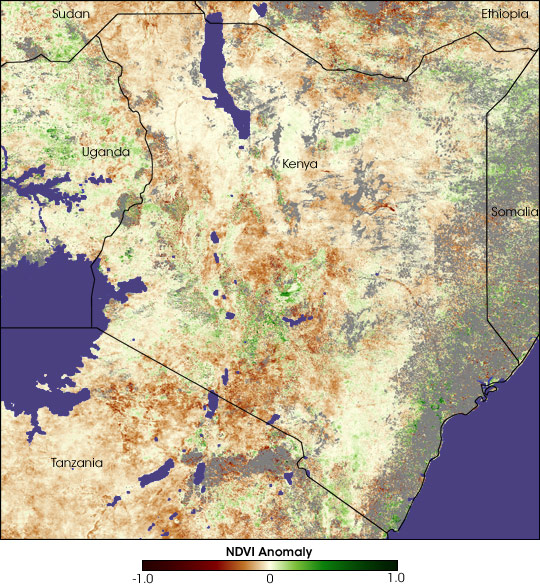 Up to 3.3 million people are facing starvation after severe drought stunted crops in parts of Kenya. The rainy season that supplies Kenya with the water needed to grow crops typically runs from March to June. This year, the rains fell from the second week of April through the first week of May, and though the rains were heavy in places, much of the country remained dry during May and June. The severe drought has led to food shortages in Kenya's Eastern, Coastal and Central provinces, and the situation may not improve soon. On July 14, Kenya's President, Mwai Kibaki, announced that poor rainfall caused at least a 60-percent crop failure in five of Kenya's seven provinces. In the same statement,which was reported in a number of international news sources, he declared a national disaster and requested nearly $100 million in international aid. Subsequently, Kenya's Ministry of Agriculture has once again reduced its national long-rains season maize projection to 1.97 million metric tons, 13 percent lower than the 2.27 million metric tons originally anticipated. While normal to above-normal maize output is anticipated in western Kenya and the North Rift, well-below-normal output is expected in the lowlands of the Coast, Eastern, Nyanza and Central Provinces.

The effects of the drought are visible in the above Moderate Resolution Imaging Spectroradiometer (MODIS) composite image. The image shows the Normalized Difference Vegetation Index (NDVI), which is a measure of how dense and green plant leaves are--an indicator of plant health. By comparing current NDVI values with the long-term average for the region at a particular time of year, scientists can determine the condition of vegetation in a region. The above image shows the NDVI anomaly (the deviation from the average) for June 9 to June 24, 2004. The region of drought, shown in brown, extends from Lake Turkana in the north southwards through central and eastern Kenya to the coastal region, where spots of brown are visible through the clouds (gray) in the south. Green regions in the southwest mark areas where above-normal maize production is expected.

Ongoing drought plagues Eastern Africa after as many as six years of poor rainfall.

Ten million people could face hunger in Kenya after a poor harvest, Kenya’s government warned on January 9, 2009. According to the Associated Press, the government declared a state of emergency to free up funds for food aid.

Ten million people could face hunger in Kenya after a poor harvest, Kenya’s government warned on January 9, 2009. According to the Associated Press, the government declared a state of emergency to free up funds for food aid.

Severe drought gripped much of East Africa in 2009, turning a riverbed into a pale tan ribbon of sand.