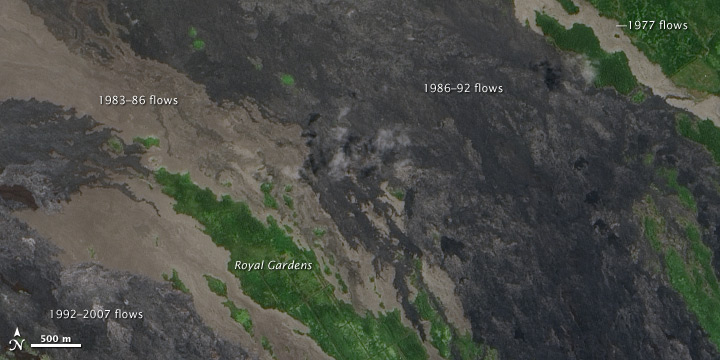 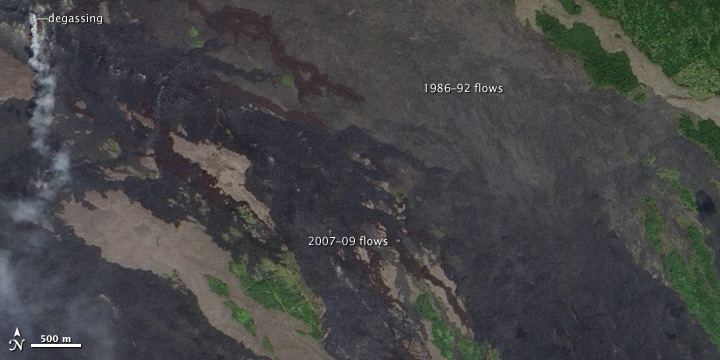 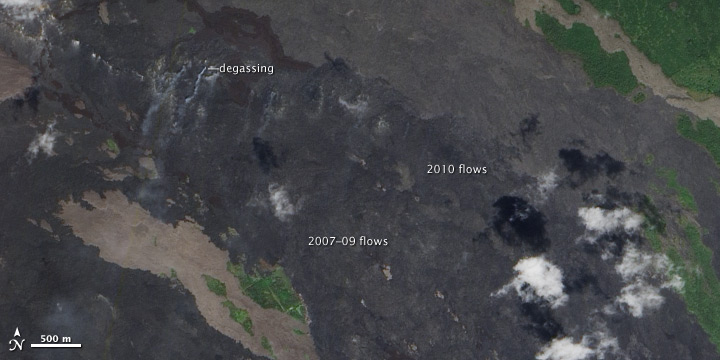 The surface of the southern coast of the Big Island of Hawaii is no more than 3,000 years old. Nearly continuous eruptions of Kilauea Volcano cover and re-cover the landscape with fresh lava. An ongoing eruption at Pu’u ’O’o, along the East Rift Zone, covered Kilauea’s slopes with more than 121.9 square kilometers (47.07 square miles) of lava from 1983–2009. As magma conduits shift and lava tubes open and close, the flows move across the landscape. 2010’s Quarry Flow continues to grow, destroying a home in the coastal community of Kalapana in July 2010.

This series of natural-color satellite images shows changing lava flows on Pulama Pali (a steep hill), below Kilauea’s active Thanksgiving Eve Breakout vent. On May 23, 2001, most of the landscape was covered by flows laid down in three earlier phases of the Pu’u ’O’o eruption. The narrow flow along the eastern (right) edge formed in September 1977 during an earlier eruption. In general, the youngest lavas are dark gray or black (although extremely fresh flows can be silver colored). Over time, wind and rain weather the lava surface, lightening it and turning it brown or red. Over hundreds of years, a layer of soil forms, and green vegetation covers the flows. The nearly abandoned Royal Gardens subdivision, in the center of the image, is one remnant forested area.

By January 18, 2009, fresh lava flows had inundated the area. Most of the remaining portion of Royal Gardens was covered, and black lava had re-covered flows from the 1980s and ’90s. A plume of steam, sulfur dioxide, and other volcanic gases escaping from a lava tube is visible in the northwest (upper-left) corner. Smaller plumes trace the path of the lava tube southeast across the image.

A new lava flow—the Quarry Flow—formed in early 2010. It is fed by the same lava source, but lies to the east (right) of the 2007–09 flows. As in 2009, gas plumes indicate the path of the active lava tube. The Quarry Flow currently enters the ocean at the Puhi-o-Kalaikini Delta. These images were acquired by the Advanced Land Imager (ALI) aboard the Earth Observing-1 (EO-1) satellite.

30th Anniversary of the Pu’u ’O’o Eruption on Kilauea

Overlapping lava flows on Kilauea Volcano illustrate the formation of the Hawaiian Islands.

The Shapes that Lavas Take, Part 2