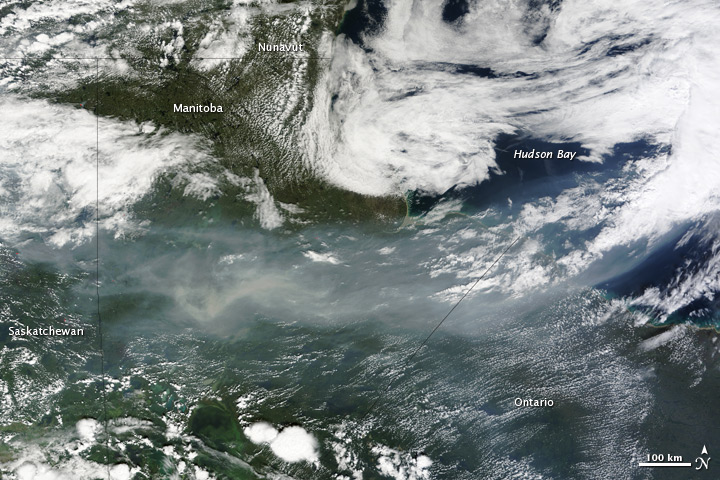 A ribbon of smoke snaked east across western Canada on August 2, 2010, clouding skies over Saskatchewan, Manitoba, Ontario, and the Hudson Bay. On August 2, the Canadian Interagency Forest Fire Center reported 1,015 fires burning in Canada, most of which were ignited by lightning. This smoke is probably coming from large fires in northern Saskatchewan.

As of July 28, more than two million hectares of land had burned in Canada during 2010, nearly twice the 10-year average, said Natural Resources Canada. For the week of July 28, most of the area burned was in Saskatchewan and Northwest Territories, and on August 2, several fires were detected in Saskatchewan. Additional large fires were burning in British Columbia, and these fires may also have contributed to the smoke.

Smoke from forest fires can travel long distances. Smoke contains small particles, carbon monoxide, volatile organic compounds and other ozone-producing gases, all of which can cause respiratory problems.

The Moderate Resolution Imaging Spectroradiometer (MODIS) on NASA’s Terra satellite acquired this image on August 2, 2010. The highest-resolution version of the image is the large image provided on the Earth Observatory, but the image is available in additional resolutions from the MODIS Rapid Response Team.

Smoke from fires in Canada streamed into the United States.

A thick, gray-brown cloud of smoke stretches across hundreds of kilometers over Canada’s Northwest Territories, Alberta, and Saskatchewan in this image from June 26, 2010.