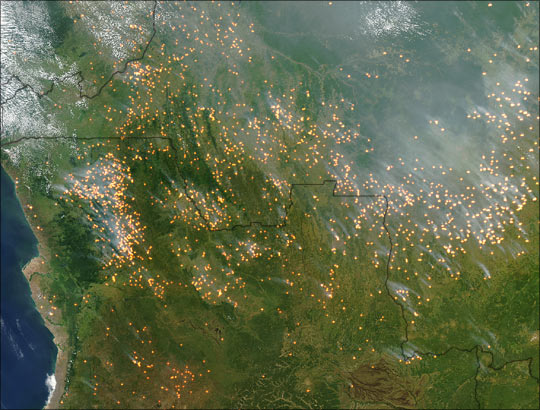 The fire season in central Africa roared to life in the first week of May. When the Moderate Resolution Imaging Spectroradiometer (MODIS) on NASA’s Aqua satellite passed over the region on the afternoon of May 6, 2004, it captured this image along with nearly 4,000 fire detections (marked in yellow) in southern Democratic Republic of Congo (top right) and northern Angola (bottom left).

Each year, the region experiences widespread agricultural burning (for example, pasture renewal and land clearing.) The widespread nature of the fires pictured here and the time of year suggest that the fires are being set intentionally for agricultural purposes. Though not necessarily immediately hazardous, such large-scale burning can have a strong impact on weather, climate, human health, and natural resources.The high-resolution image provided above is 500 meters per pixel. The MODIS Rapid Response System provides this image at additional resolutions.

To read more about the role and impact of fire in Africa’s savannas and grasslands, read Savanna Smog.

Widespread agricultural fires throughout the month of June sent plumes of carbon monoxide across the Atlantic Ocean towards South America.