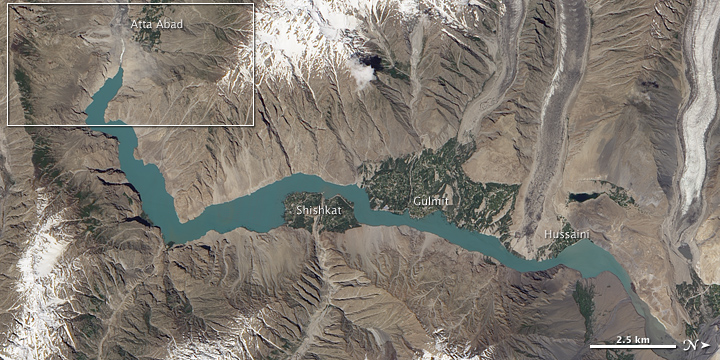 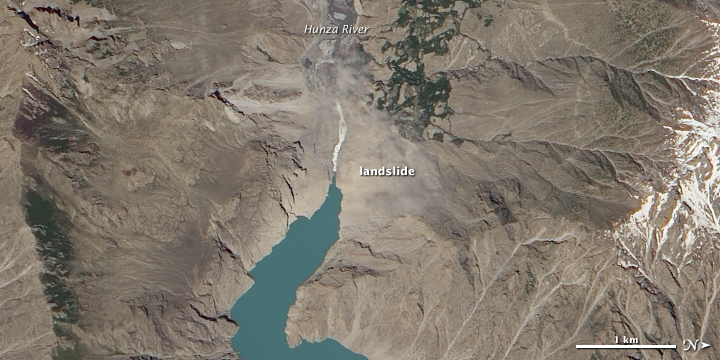 Along the Hunza River in northwestern Pakistan, a lake had been building for months behind a landslide dam that formed in January 2010. Engineers and army laborers worked furiously on a spillway to relieve the growing lake, which had backed up past several settlements. In late May 2010, the lake finally began flowing over the spillway. According to geologist David Petley at the International Landslide Centre, lake levels had apparently stabilized by July 6.

The Advanced Land Imager (ALI) on NASA’s Earth Observing-1 (EO-1) satellite captured this natural-color image of the landslide lake and its newly functioning spillway on July 7, 2010. The top image shows a wider view and the bottom image shows a detailed view of the area outlined in white above. North is to the right.

Water pouring over the spillway appears white, likely resulting from its rapid flow. The rest of the lake appears nearly uniform blue-green. Most of the land around the Hunza Valley is brown and bare, but pockets of vegetated land associated with settlements appear near the riverbanks. On the nearby mountaintops, snow cover lingers, and small glaciers snake toward the river valley.

In the first half of 2010, the landslide lake displaced some 1,500 people and isolated roughly 3,000 locals from the outside world by submerging a crucial bridge, according to news reports. As water levels rose behind the landslide, some residents demolished their homes to salvage building materials. Meanwhile, downstream communities faced a risk of a flood should the landslide lake break through the earthen dam suddenly. Completion of the spillway was expected to reduce the risk of such a catastrophic event.

Acquired on May 2, 2010, this false-color image shows a growing landslide lake in the Hunza Valley of Northern Pakistan. A white outline shows the landslide lake’s extent in mid-March 2010.

Acquired on August 3, 2011, this natural-color image shows the spillway relieving pressure on the lake created by a January 2010 landslide in the Hunza Valley of northern Pakistan.