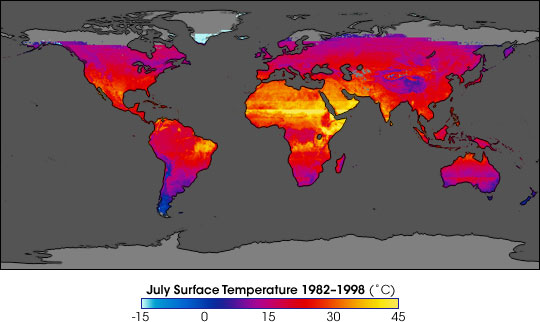 Since 1981, scientists have used the Advanced Very High Resolution Radiometer (AVHRR), flying aboard the NOAA series of polar-orbiting satellites, to record the Earth’s land “skin” temperature. Unlike surface-based measures that typically use thermometers to record air temperature between 2 and 3 meters (6 to 9 feet) above the surface, skin temperature refers to temperature readings right at the the land surface (although it can refer to temperature measures at the top of the trees in areas where the forest canopy is thick). Such measurements collected routinely over snow-free lands all over the world and averaged over time allow scientists to produce maps like the one above showing average global surface temperature. In this image, the colors represent the Earth’s average temperature for the month of July for a 17-year period (from 1982-98). Yellow shows the warmest areas, as high as 45°C (113°F), while light blue and white shows the coldest areas, as low as minus 15°C (5°F).

According to Menglin Jin, visiting scientist at NASA’s Goddard Space Flight Center and researcher at the University of Maryland-College Park, these data reveal that Earth’s average land temperature increased at a rate of 0.43°C (0.77°F) per decade during that span. The data show good agreement with ground station measurements averaged over the entire globe, which show a rise of 0.34°C (0.61°F) per decade. Jin’s findings appeared in the March 2004 issue of the Bulletin of the American Meteorological Society.

For more details and additional images, please see the NASA press release: Satellites Act As Thermometers in Space, Show Earth Has A Fever.

Rising Temperatures: A Month Versus a Decade

April to September 2014 was the hottest spring and summer in 130 years of recordkeeping. Here’s why that matters, and why it doesn’t.

July 2017 was statistically tied with July 2016 as the warmest month in 137 years of modern record-keeping.