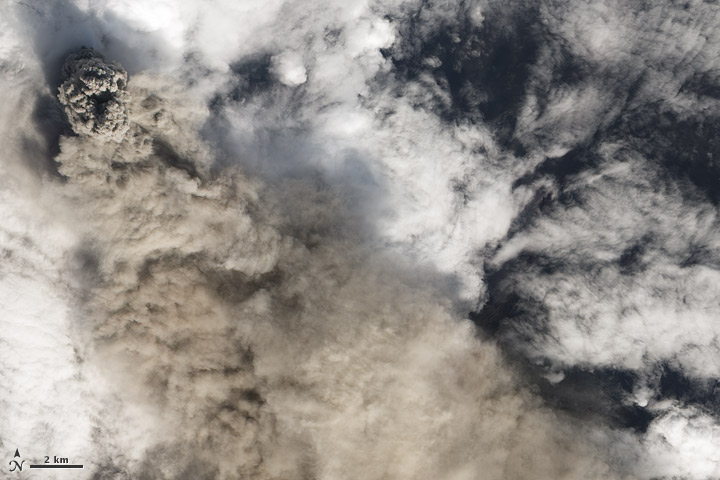 On May 13, 2010, a puffball of volcanic ash briefly hovered over Eyjafjallajökull Volcano, as the Advanced Land Imager (ALI) on NASA’s Earth Observing-1 (EO-1) satellite passed overhead and captured this natural-color image. Near the upper left corner of this image, a round, slightly elongated ash plume appears. The puffball appears to tower over another ash plume that fans out toward the southeast.

According to May 13 bulletin from the Icelandic Meteorological Office, winds were calm over the Eyjafjallajökull eruption site, but air was unstable to the south. The difference in air stability would explain the difference in ash plumes in this image. The satellite likely passed overhead shortly after a fresh burst of activity from the volcano, before winds had a chance to disperse the latest plume of ash.

On May 13, 2010, the Icelandic Meteorological Office reported that Eyjafjallajökull’s eruption plume mostly reached a height of 6 kilometers (20,000 feet), occasionally soaring up to 9 kilometers (30,000 feet). The ash plume headed toward the southeast.

Acquired May 13, 2010, this natural-color image of Eyjafjallajökull Volcano shows a puffball of volcanic ash towering over a lower-altitude ash plume that fans out toward the southeast.

Acquired May 22, 2011, this natural-color image shows a plume from Grímsvötn on Iceland.