Deforestation Patterns in the Amazon 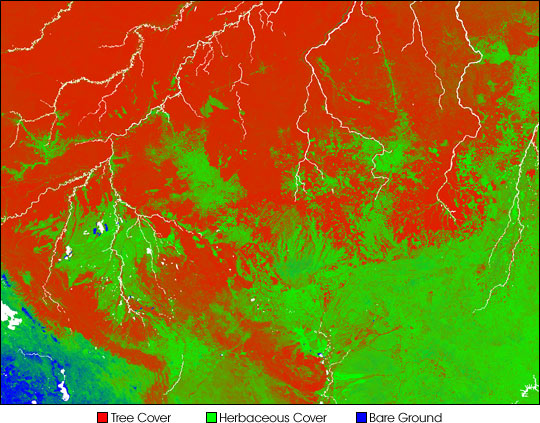 Deforestation in the Amazon Rainforest is occurring most rapidly along a curve that hugs the southeastern edge of the forest that scientists and resource managers have come to call the “Arc of Deforestation.” The land is cleared for cattle ranching, small-scale subsistence farming, logging, and, increasingly, soybean production for world markets.

Satellite maps of deforestation over the years have revealed that this deforestation often follows a herringbone pattern, in which a new road appears as a thin line of cleared terrain, followed by the appearance of parallel clearings on either side of the road. Over several years, the clearings will expand from the road outward into the forest. Scientists now use the appearance of new roads to predict areas of the Amazon that are likely to be cleared in the near future. This image of the southern Amazon uses satellite data from the Moderate Resolution Imaging Spectroradiometer (MODIS) on the Terra satellite collected in 2000 and 2001 to classify the terrain into three separate land surface categories: forest (red), herbaceous (non-woody) vegetation like grasses (green), and bare ground (blue). The Amazon’s numerous rivers appear white.

The image shows deforestation in various stages. A new road appears to be extending northward into the forest from a larger clearing to the right of center; it makes a thin green line amid the red. The area at the right center edge of the image is a patchwork of fields and forests. At left center edge, a new clearing is beginning in the Acre region of Southeastern Brazil. These patterns are much more visible in the high-resolution image.

Not all green area is deforested, however. The large patch to the left of center with spots of blue and white in it is a natural wetland area, for example. And the southeast margin of the Amazon naturally transitions to a more open landscape with lots of grasses. In the high-resolution image the grassy plains called the llanos stretch across parts of Columbia and Venezuela.

According to reports from the Associated Press, the yearly deforestation figures recently released by the Brazilian government show that a near-record area of the Amazon was cleared in 2003. They estimate that 9,170 square miles (23,750 square kilometers) of rainforest was cut down in the 12 months ending in August 2003. While this amount represents one of the largest forest losses on record for the Amazon, the increase between 2003 and 2002 was nowhere near the 40 percent increase observed between 2001 and 2002.

Image by Robert Simmon, based on data provided by the University of Maryland’s Global Land Cover Facility

Extensive Fires in the Amazon