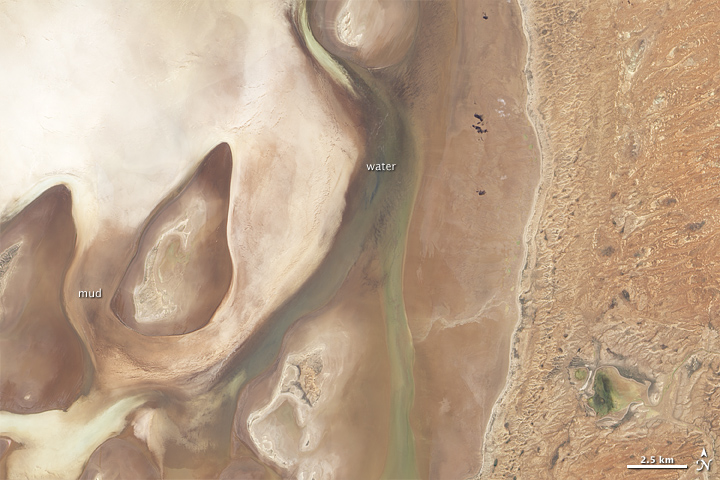 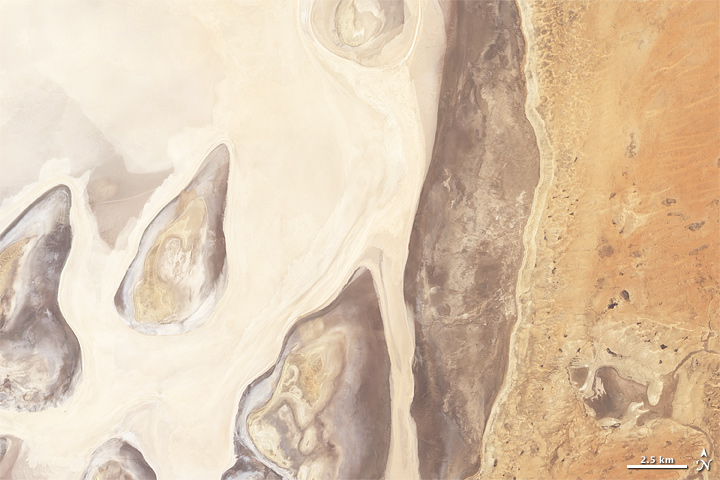 In central Australia, spanning the borders between several states, lies an expanse of ephemeral lakes. This area receives 149 to 216 millimeters of rainfall a year on average, and the basins pass most of their time as saltpans. Occasional rains do, however, fill them with water. In South Australia, at the southern end of an arc of saltpans, is Lake Frome. When Frome fills, the waters usually come from precipitation in the northern Flinders Ranges, or from water overflowing from another saltpan to the north, Lake Callabonna.

The Advanced Land Imager (ALI) on NASA’s Earth Observing-1 (EO-1) satellite captured these natural-color images of Lake Frome on April 10, 2010 (top), and March 7, 2009 (bottom). The image shows the eastern edge of the saltpan; the land to the east has a slightly higher elevation and consists of a network of typically dry river channels. Inside the saltpan, the land surface is uneven. Areas shaped like sloppy teardrops rise above the surrounding plain.

In the 2009 image, the salt lake appears bone-dry, filled with off-white sediment. In the 2010 image, however, water has infiltrated the area. Water on the land surface appears in shades of dull green, and a temporary river runs north-south through the image. Water also fills a network of small temporary lakes in the southeast. Throughout much of Lake Frome, water makes its presence known not through standing water but through mud and/or wet salts. Water seeping through typically dry sediments had darkened the surface, especially in the west.

Water flowing southward into Lake Frome continued a pattern of drainage that began earlier in 2010. Rains in central Australia filled impermanent rivers from Queensland to South Australia. The water initially filled river channels in the north before traveling southward. As Lake Frome lies at the southern reaches of saltpans in this region, it was one of the last areas to fill with water.