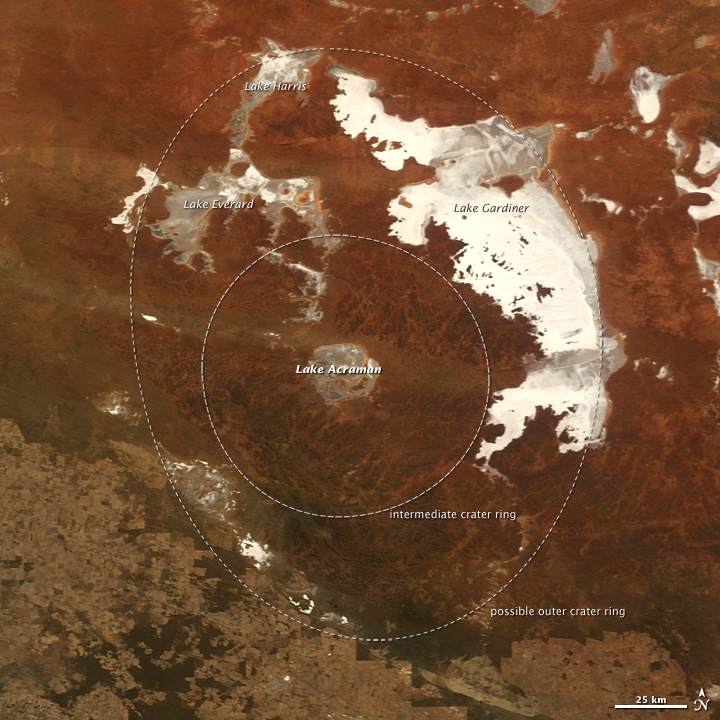 Some 590 million years ago, geologists estimate, a massive asteroid slammed into what is now South Australia. One remnant of that impact is Lake Acraman, a small, shallow salt lake in the arid Australian outback. The Moderate Resolution Imaging Spectroradiometer (MODIS) on NASA’s Terra satellite captured this photo of Lake Acraman and its surroundings on February 18, 2010. Orange and brown soils mix with off-white saltpans, including Lake Gardiner and Lake Everard in this true-color image. Dotted white lines indicate possible extents of the Acraman Impact Structure.

Acraman is a complex crater. Rather than the simple bowl shape we often associate with craters, Acraman has a complicated surface with variations in elevation. Geological studies have found that, over time, Acraman’s surface eroded several kilometers below the original crater floor. Studies of the current land surface and debris ejected by the collision suggest that the impact produced an uplifted ring spanning roughly 40 kilometers (25 miles) in the crater’s center. The rim surrounding the inner ring may have spanned 85 to 90 kilometers (53 to 55 miles), and the total area of disturbed rocks might have been as wide as 150 kilometers (95 miles).

Radiometric dating of the rocks affected by the Acraman impact indicates that the event occurred almost 600 million years ago, during a geologic period known as the Ediacaran (sometimes called the Vendian). Although our planet was more than 4 billion years old at that time, it was still before the time when life forms began leaving behind a rich fossil record. Nevertheless, fossils do occur in Ediacaran rock layers, and many of them are acritarchs—small (often microscopic) fossils that could result from a wide range of organisms.

A dramatic change in the types of acritarchs found in the Ediacaran rock record coincides with the estimated occurrence of the Acraman impact. Although some studies have linked this fossil turnover to a nearly worldwide glaciation, others have suggested the Acraman impact as a possible cause of the widespread disturbance to life on Earth at that time.

The landscape near the southern Murray River contrasts fertile farmland with dry lakes.

Western Australia’s Lake Dundas is a salt lake in a dry environment, but it once sat along a drainage channel with headwaters in Antarctica.