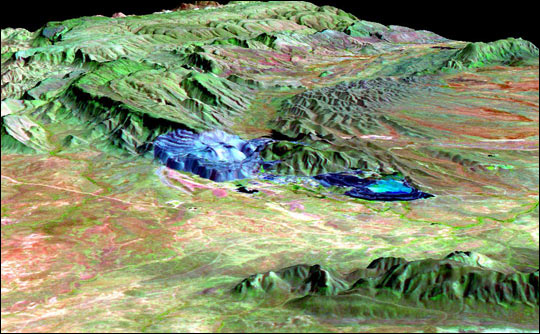 The Argyle open-pit diamond mine, located in the Kimberley region in the far northeast of Western Australia, is the world’s largest single producer of diamonds. The region is remote, rugged and hot, with temperatures of over 40°C during the wet season from October to March. The discovery of the Argyle orebody marked the first time that a commercial diamond occurrence had been identified in lamproite rocks, instead of kimberlite. The deposit was discovered in 1979 following some 12 years of exploration by various companies in the area. The discovery of alluvial diamonds led directly to their source, the AK1 pipe. Since coming into operation, Argyle has produced over 600 million carats of diamonds. 2002 output was 33.5 million carats, of which 95 percent is industrial diamonds. Argyle also produces between 90 percent and 95 percent of the world’s pink diamonds.

This 3-D perspective view was created by draping an Advanced Spaceborne Thermal Emission and Reflection Radiometer (ASTER) shortwave infrared, near infrared, and green image over an ASTER-derived digital elevation model; the height of the terrain shown here is exaggerated by two times the actual height. The scene was acquired August 20, 2000, and is located near 16.6° South, 128.3° East.

These images of the Saline Valley area, California, were acquired March 30, 2000, by the Advanced Spaceborne Thermal Emission and Reflection Radiometer (ASTER).