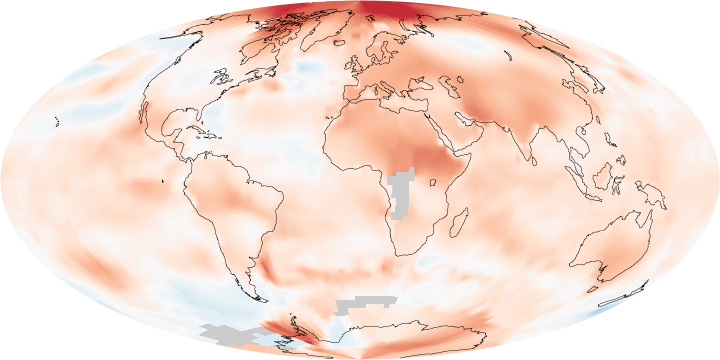 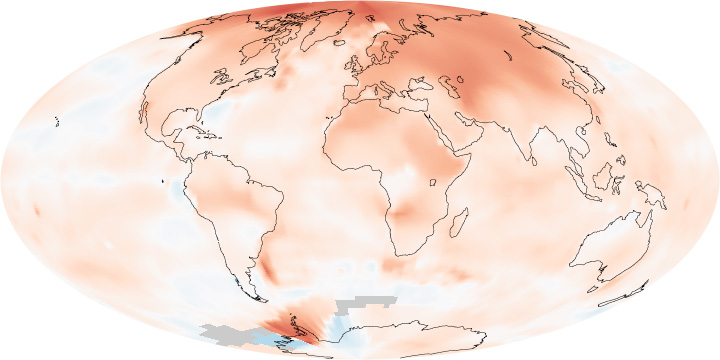 Except for a leveling off between the 1940s and 1970s, Earth’s surface temperatures have increased since 1880. The last decade has brought temperatures to the highest levels ever recorded, and the last year of the decade (2009) was tied for the second warmest year in the modern record, a new NASA analysis of global surface temperature shows. The analysis, conducted by the Goddard Institute for Space Studies (GISS) in New York City, is based on temperatures recorded at weather stations around the world and satellite data over the oceans.

Although 2008 was the coolest year of the decade, due to strong cooling of the tropical Pacific Ocean, 2009 saw a return to near-record global temperatures, despite an unseasonably cool December in much of North America, Europe, and Asia. The year was only a fraction of a degree cooler than 2005, the warmest year on record, and tied with a cluster of other years—1998, 2002, 2003, 2006 and 2007 1998 and 2007—as the second warmest year since modern recordkeeping began in 1880. In the Southern Hemisphere, 2009 was the warmest year on record.

“There’s always an interest in the annual temperature numbers and on a given year’s ranking, but usually that misses the point,” said James Hansen, the director of GISS. “There’s substantial year-to-year variability of global temperature caused by the tropical El Niño-La Niña cycle. But when we average temperature over five or ten years to minimize that variability, we find that global warming is continuing unabated.”

January 2000 to December 2009 was the warmest decade on record. Throughout the last three decades, the GISS surface temperature record shows an upward trend of about 0.2°C (0.36°F) per decade. Since 1880, the year that modern scientific instrumentation became available to monitor temperatures precisely, a clear warming trend is present. In total, average global temperatures have increased by about 0.8°C (1.5°F) since 1880.

NASA images by Robert Simmon, based on data from the Goddard Institute for Space Studies. Caption by Adam Voiland and Holli Riebeek.

These maps illustrate just how much warmer temperatures were in 2009 and the decade (2000-2009) compared to average temperatures recorded between 1951 and 1980.