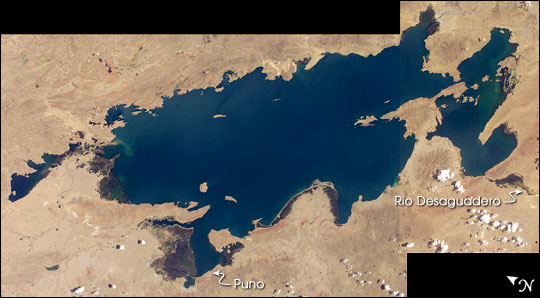 Perhaps more importantly, Lake Titicaca contains one of South America’s longest climate records, extending back more than 25,000 years. Scientists have studied indicators of the water level changes over time in Lake Titicaca to tease out information about precipitation shifts in the high Andes and the South American tropics. Because the lake occupies the low point of the Altiplano, much of the water of the high plateau eventually trickles into the lake. And because it is surrounded by mountains, very little of Lake Titicaca’s water drains out—the Rio Desguadero is the only major outflow river. So, like a bathtub with no drain, this large and deep lake (with depths of several hundred feet) has become the collecting basin for more than 25,000 years of sediment. These sediments and their fossils contain clues about past climate conditions.

The restricted outflow of the lake creates conditions where even shorter, interannual climate cycles (like El Niño /Southern Oscillation) impact Lake Titicaca’s water levels. Recent lake level variations have been several meters, with low levels occurring during regional droughts of El Niños. Right now, the region is relatively wet. In this image, the dark greens of the wetlands along the shallower margins of the lake contrast strongly with the surrounding desert, while large cities like Puno, Peru (100,000 people), are difficult to discern from the surrounding countryside.

Astronaut photographs ISS008-E-5649 and ISS008-E-5652 were taken November 8, 2003, with a Kodak DCS760 digital camera equipped with an 80 mm lens and provided by the Earth Observations Laboratory, Johnson Space Center. The two images were mosaicked together to make this image The International Space Station Program supports the laboratory to help astronauts take pictures of Earth that will be of the greatest value to scientists and the public, and to make those images freely available on the Internet. Additional images taken by astronauts and cosmonauts can be viewed at the NASA/JSC Gateway to Astronaut Photography of Earth.

Lake Torrens is a Lake Again

In October 2022, a substantial amount of water returned to this ephemeral lake in South Australia.