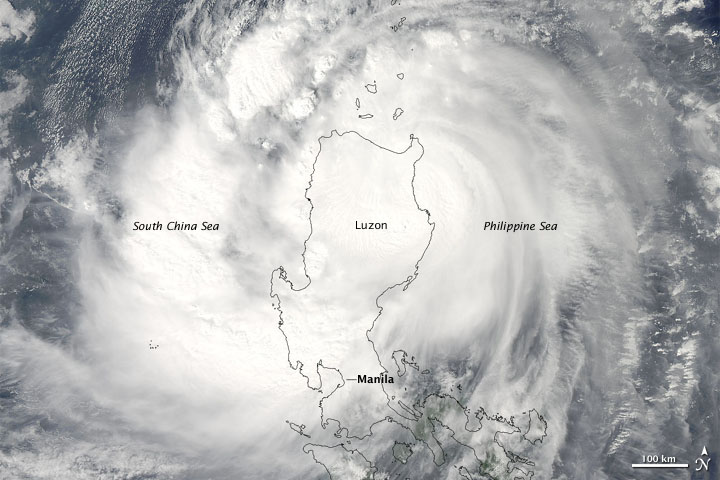 Typhoon Parma passed over the northern Philippines on October 3, 2009, claiming at least 15 lives, according to Agence France-Presse. The news agency reported that two separate landslides buried homes in the province of Benguet, killing 12 people, in addition to three other deaths reported by authorities. Parma struck the Philippines in the wake of deadly floods from Tropical Storm Ketsana.

The Moderate Resolution Imaging Spectroradiometer (MODIS) on NASA’s Aqua satellite captured this true-color image of Typhoon Parma at 1:20 p.m. Manila time (5:20 UTC) on October 3, 2009. Clouds stretch from the Philippine Sea in the east to the South China Sea in the west, completely covering the island of Luzon. Unlike earlier images, however, this image does not show an easily identifiable eye of the storm.

Acquired October 3, 2009, this true-color image shows Typhoon Parma hovering over the island of Luzon. Storm clouds stretch from the Philippine Sea to the South China Sea.

Typhoon Parma moved westward across the Pacific Ocean in late September 2009. Parma was downgraded to a tropical storm as it passed over the Philippines, but moved back toward the islands, apparently interacting with Typhoon Melor to the northeast. Parma finally dissipated on October 14.

Acquired May 24, 2011, this image shows Typhoon Songda off the Philippines.

Acquired September 30, 2009, this true-color image shows Typhoon Parma over the Pacific Ocean, west of the Philippines.

Moving northwest toward southern China and Vietnam, the massive Typhoon Nesat covers most of the South China Sea in this photo-like satellite image from September 28, 2011.